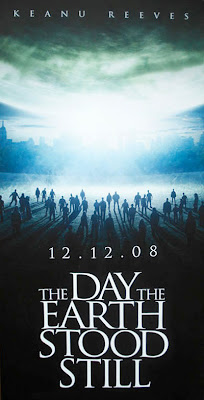 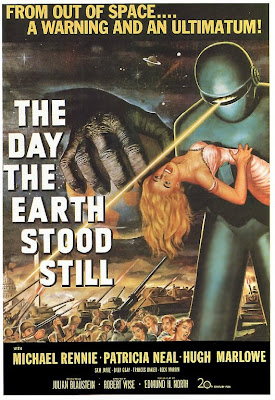 "The Day the Earth Stood Still," is a remake of the 1951 movie by the same title. The latest version has kept many—even seemingly outdated—elements of the 1951 film, most likely as a reverential nod to sci-fi film history, but the story-line is also very similar. What's new is the new threat to planet Earth.

The 1951 film came out in fearful, post-WWII, Cold War times, as a kind of morality play and warning. It was centered on the absolute necessity of peace among peoples. The biggest threat at the time was all-out nuclear war. The nuclear age had begun. The plot: A spaceship lands in D.C., an alien informs earthlings that a super race of robots will destroy the earth if humans insist on escalating their violence. Klaatu, the alien, is an explicit Christ figure, coming in "peace and goodwill," calling himself "Mr. Carpenter." But he is also very much the figure of a judge-savior. In the film, the obliterating, incinerating force of nuclear power is evident in the quite-advanced special effects. Military tanks, the mainstay of WWII ground battles, simply evaporate.

The 2008 film is equally somber. It felt a bit hokey to me, but everyone in my crowded theater was wrapt in hushed silence. There was hardly any humor in the film. Even John Cleese (Monty Python) plays a grave role. Keanu Reeves is Klaatu (there will be unavoidable jokes about how well he plays an alien—he has always been noted for his stiff acting). Jennifer Connelly is Helen, scientist and stepmother to Jacob (Jaden Smith), who is called upon by the U.S. government to assist in the crisis. Jon Hamm (successor to the "Harrison Ford worried look") is a fellow scientist.

SPOILER ALERT: The new threat to Earth (from the same source: humans) is not so much the destruction of each other through violence, but the destruction of Earth itself. The aliens want to save the earth by destroying the humans, because Earth is "one of the few planets that can sustain life." The aliens begin saving animal species in spherical "arks." They have studied humans and see that we do not have the will to change. Helen is the only one who can change Klaatu's mind.

Klaatu witnesses human love and human's ability to change. He warns that if he saves Earth, there will be a price to pay. That price will be our present "way of life. "

The U.S. government and military is portrayed as stuck in impossibly futile and antiquated mindsets and strategies. They are reminded over and over: they are not really in charge, but their only response is more violence.

The solution at the end is radical, interesting, but untenable. Any other options out there (besides what we earthlings are already attempting)?

Will someone please give Jaden Smith an Oscar already??

Scott Derickson, the director, is a great Christian dude. He did the excellent (and very Catholic) "Exorcism of Emily Rose." He is associated with Act One, Hollywood—Christian bootcamp for the industry.

SPOILER ALERT: How will the aliens get rid of us? Through the use of a swarm of metallic insects that only consume humans and our artifacts, leaving no trace. Again, this looks much like the effects of a nuclear explosion.

When they think the end is near, a scientist prays the Our Father.

Religion plays a role as TV news reports say that the major world religions see this as the sign of the beginning of a new era.

"The Day the Earth Stood Still" (2008) is a typical, now-hackneyed, dime-a-dozen, apocalyptic, cataclysmic, end-of-the-world, total-disaster epic movie. We've seen these same scenes over and over. Why do we still watch? (I do because I have to as a film critic.) Because we believe in it? To allay all other fears by immersing ourselves in the mother of all fears? Are we like kids who love to hear/see the same thing over and over again? Are we practicing, like some huge fire drill? I suppose it's a good thing to believe in the end of the world, to imagine solutions to saving the planet. Neither science nor the Bible say it will end with a "whimper." Is this a guy thing that women feel obliged to watch, also?

THEOLOGY OF THE BODY: Klaatu, when asked if he's human, says: "My body is." GONG! No can do, dude! You is either yooman or yoo is ain't.

Accurate skewering of trigger-happy Americans? At first meeting the alien reaches out his hand to Helen and, of course, the military shoot him. Little Jacob says: "Kill the alien—just to be sure."

Klaatu says (about human incorrigibility): "I spoke to your leaders (U.S. gov), but they wouldn't listen." Helen says: "Those are not our leaders!" and takes him to a Nobel Peace Prize winning scientist. Hmmmmm….. He says: civilizations change on the precipice, when they're forced to. Don't take that moment away from us.

THEOLOGY OF THE BODY: Klaatu: "You treat the earth as you treat each other…." Right on, spaceman! BTW, The earth is feminine. Implications???

A rather cool image at the end (like "Fight Club," "Bella," and so many other movies) of man, woman, (& child) on the brink of a new world.

Cold, impersonal science vs. what makes us human:
At his father's grave, Jacob begs Klaatu to raise his dead father to life (Klaatu has healing powers). Klaatu says he doesn't have that power, but don't worry, the universe doesn't waste anything, everything gets transformed, energy never dies, blah, blah…. Small comfort! Jacob tells Klaatu to take a hike.

--You must, must, must see "Dr. Strangelove OR How I Learned to Stop Worrying and Love the Bomb" starring Peter Sellers.

--You must, must, must get a copy of Christian band "Passafist's" eponymous album, if ONLY for the song "Christ of the Nuclear Age."

--You must, must, must look at Ukrainian-Canadian Catholic artist William Kurelek's "Nuclear Madonna" image. (Check out more art by this holy, pro-life and amazing artist who struggled with mental illness all his life: http://www.niagarafallsartgallery.ca/ ) If you can't find it online (I couldn't) see: www.janebernhardt.com who also has a Nuclear Madonna.

MY EXPERIENCE IN THE THEATER WITH THE HOMELESS DUDE:

I sat three seats down from a elderly, homeless dude who began SNORING early into the movie. I mean giving the thunderous soundtrack a run for its money SNORING. I mean like some huge, rumbling emergency generator SNORING. I mean serious surround sound SNORING.

DUDE: SNORING begins. Audience around him doesn't seem to notice or care. I'm telling you, people LOVE these disaster movies. I get my first whiff of him.

MOVIE: Alien is shot and rushed to ER.

MOVIE: The U.S. government is afraid because the alien disables our defense missile system. Alien states that his human body will "take some getting used to."

DUDE: A female cinema attendant wakes him up and tells him he must SNORE no more.

MOVIE: Klaatu is being interro-tortured.

DUDE: Had SNORELESSLY fallen asleep again, now wakes up, begins repeatedly blessing himself, pointing at and talking to the screen. I began seeing a parallel between the alien and this man. What did I really know about him? What was his story? Was he a Vietnam war vet? Is there a reason this scene is speaking to him? Is he Catholic? (I have not inspired the rash of Signs of the Cross. I am freezing and have a knit hat covering my head.)

DUDE: Steps over me and leaves theater.

MOVIE: The military manage to put the Iron Giant in a big Iron Giant carrying case.

DUDE: Returns to the theater and sits next to me. Second whiff. (I have a very poor sense of smell, so when I can smell something or someone, it's bad.)

MOVIE: The swarm of human-and-human-ephemera-eating-bugs eats up a truck.