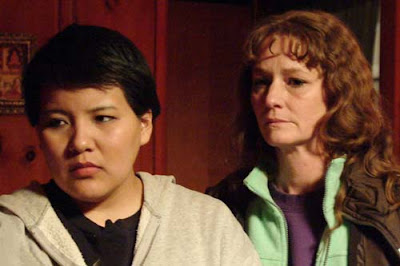 Run to the nearest video store and rent…oh, wait, we don't have to do that anymore, do we? Run your fingers over your keyboard and put "Frozen River" at the top of your Netflix queue. This indie gem is getting Oscar attention for a reason. Although all the brouhaha is focused on Melissa Leo, this is really a story of TWO tough chicks, one white, "Ray" (Melissa Leo), and one native (Mohawk), "Lila" (Misty Upham) living on the New York/Canada border. They're both short on cash, a man, and both are struggling to raise children. They don't like each other, but they need each other and do things for each other that even best friends wouldn't do. Both are rather bigoted and judgmental towards the other. The characters are written so realistically--carefully avoiding stereotypes of both white trailer trash and noble, wronged Indian. Yet, each of them is exactly who they are and nothing more. They live in very limited, defined worlds with small dreams and aspirations. The everyday tenuousness of their respective situations doesn't allow them the luxury of daring to think too big. However, precisely because of their hardscrabble lives, every decision, every altruistic gesture that Ray and Lila make takes on gigantic proportions and consequences. There is absolutely nothing angelic about these women, and yet hints of transcendence creep in here and there at unlikely moments.

A lucrative smuggling operation of illegal aliens is too tempting for either woman to pass up. They use Ray's car (because of the trunk) to transport human cargo over a frozen river. But there are State troopers, kids left home alone, house payments, shady underworld characters, and literal thin ice to be dealt with. The women form an alliance of convenience and don't think too far ahead—it's just too scary to do so. The power shifts between Ray and Lila, as do their manifestations of human tenderness. (They can't afford to both be caring at the same time.)

Not to be overlooked is Charlie McDermott's performance as Ray's teenage son, T.J., poignantly named after his absent father. He's trying valiantly to be the man around the house and take care of his younger brother, but his methods are as criminal as his Mom's. I don't want to spoil the ending, but there's a whopper plot point that could either be a head-scratcher or simply overlooked. You need to know something about "First Nations" (what native Canadians are called) to appreciate its momentousness. First Nations peoples had a slightly different experience than Native Americans. They were never slaughtered or hunted down. They didn't sell land or sign treaties (that's why some are demanding Vancouver back). The white people just kind of moved in on them, set up reservations, pushed them around, etc. The agreement from the beginning was "self-governance," so, technically, First Nations peoples are not bound by white man's laws. They have their own tribal police and tribal justice system, which, by the way, works well. T.J. gets a taste of this tribal justice, or rather, mercy.

I must digress further. Dwayne "Dog" Chapman of the A & E real-life TV hit show "Dog the Bounty Hunter" is part native, and you will see this same justice/mercy dynamic at work in his tactics. "Dog the Bounty Hunter" is THE most Christian show on TV. There, I said it. Dog (who comes from a long line of bounty hunters and is a Christian) has as his motto, "give everyone a second chance" (as God did for him). He shows forth the mercy of God the Father to each fugitive while upholding just laws. His first aim is to treat each person with dignity. Second: rehabilitation from drugs and/or a life of crime so you can go back to your family. Third: serve your time, pay your dues to society.

"Frozen River" is a near-perfect little movie. The only thing I woulda done differently was have Ray break down and really bawl when she hugs T.J. toward the end, but maybe, again, that's not an option for a hard-luck woman like her. The highs and lows in this movie come and go in a matter-of-fact way, as in the lives of the poor, yet the movie never bores. I have never felt so UNmanipulated by a film. Kudos to writer/director, Courtney Hunt. I eagerly await her next project. 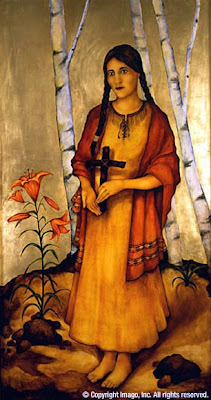 I'm sure that Blessed Kateri Tekakwitha (who was half Mohawk and migrated in the opposite direction, from Auriesville, NY, to Kahnawake, Quebec, where she's now buried in the church of St. Francis Xavier) smiles down on "Frozen River." http://conservation.catholic.org/kateri.htm

OK, can't let this tidbit go: I just looked up Misty Upham's biography on www.imdb.com --where actors can write their own bio. Misty is self-described as "pro-life"! You go, girl!