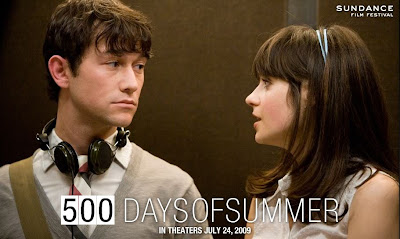 A young woman who doesn't want to commit. A young man who's smitten. We usually think of it the other way around, but Summer (Zooey Deschanel—some of her best work to date) doesn't believe in "true love" or finding "the one," and Tom (Joseph Gordon-Levitt) does.

"500 Days of Summer" is fresh, young, not-too-edgy, and uses a technique of showing scenes from the 500 days, numbered, but out of order. It works seamlessly and never feels choppy. The whole winsome-but-not-gooey romance is tied together with a soundtrack which often breaks into the story itself because Summer and Tom bond over a shared love of music (Deschanel, also a singer in real life, gets to perform—as she often does in her on-screen roles).

Where do Summer and Tom get their respective, conflicting ideas about love? A brief but important retrospective of their growing-up years tells all. Summer is the child of divorce, Tom is the child of pop culture with its hope-filled dreams. But their stubborn clinging to their fixed ideas blocks them both from facing reality. Although "500 Days" is a light touch (though not quite a romantic comedy), Tom's pain can truly be felt. Tom's advantage is that he's not alone. His buddies and his little sister all help interpret and even narrate his love life for him, with some not-too-shoddy advice. Love isn't just a private thing, it's a social thing. It's heartening to see how much the younger generation "gets right" about love. The disheartening part is the (all too true-to-life) complete trivialization of the body and sex. Even though Tom complains about the casualness of it all, it doesn't slow him down one bit. The emphasis is on the spiritual, finding a soul mate, almost to the point of a kind of "spiritualism" of male/female relationships.

The ambience of the movie incorporates a huge swath of influences from foreign films, the 60's, jazz, literature, art, architecture—in which we can feel the protagonists sincerely reaching out for meaning, authenticity and beauty. An attempt is made to make the city of Los Angeles a character in the movie, but it doesn't happen. The clichés ring true that the city of L. A. rings hollow (I lived there for five years): soul-less, history-less, community/communion-less. Instead, the city almost stands as a cautionary symbol of what can happen when we don't risk, don't commit, don't suffer in love.

Summer is reminiscent of the genuine-love-phobic Holly (Audrey Hepburn) in "Breakfast at Tiffanys" (a movie that many young people today are re-discovering and "trust"—in their own words!) A line from the movie states: "People DO belong to each other." We don't need movies from 1961 or 2009 to tell us so, but "Breakfast" and "500 Days" certainly reinforce our own conviction that love trumps all.

In the end, "500 Days" is Tom's fated/fatalist/determinist/magic-pixie-dust idea of love versus Summer's serious/troubled/sad/it-never-works-out-so-let's-just-have-fun idea of love. The truth about love is somewhere in between.

"Love consists of a commitment which limits one's freedom—it is a giving of the self, and to give oneself means to limit one's freedom on behalf of the other. This might seem to be something negative or unpleasant, but love makes it a positive, joyful and creative thing. "Freedom exists for the sake of love. Man longs for love more than for freedom—freedom is the means, and love is the end." --JP2G, "Love and Responsibility"

There's no God in the movie. BUT there is an attempt to match earthly events with some kind of cosmic significance. (The primal religious impulse. Which is good, but left to itself it becomes superstition.) I wanted to stand up in the theater and shout: "Yes! Yes! There is a cosmic significance to your relationships--and it starts with the body!" Theology. Of. The. Body. "The body and it alone makes visible the mystery: the spiritual and the divine." TOB #76.

An O. Henry's "The Gift of the Magi"-style exchange of gifts is given and both Summer and Tom are better for it. At the beginning of the movie we were warned that this was not a love story. But it is.

Email ThisBlogThis!Share to TwitterShare to FacebookShare to Pinterest
Labels: 500 days of summer, theology of the body, zooey deschanel