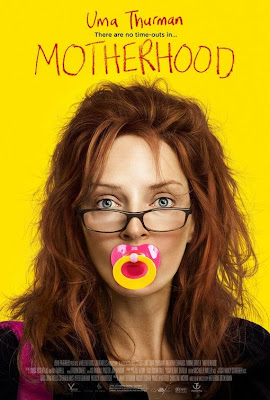 I almost gave this movie a "DNR" (Do Not Recommend), but I stuck it out, and the ending was worth it.

"Motherhood," starring Uma Thurman as Eliza, a fortysomething aspiring writer living in trendy Brooklyn with her husband Avery (the balding Anthony Edwards, who gives a solid, convincing performance) and two small children, examines the modern (or timeless?) conflicting desires of, well, mothers with small children. I was eager to see what filmmaker Katherine Dieckmann would do with this conundrum. Whither feminism? New solutions? How would she avoid clichés and tired depictions of tired Mommies? Any Theology of the Body?

"Motherhood" floundered from the start. Although throwing herself into the role of pleasantly-frazzled, borderline-ditzy Eliza, Uma—sporting a crazy-fountainlike-updo throughout--is just too classy and elegant to pull it off in my estimation. And don't expect any high drama here. Eliza is happily married and adores her adorable kiddos--check out the majorly gap-toothed Clara (Daisy Tahan): a face NOT only a mother could love. The relative familial harmony is a welcome relief from TV shows and movies about marital/parenting strife. A couple in love with each other and with their kids that act like they're in love? What a concept!

However, the film's tone is uneven (mostly a light comedy), scenes are in need of serious editing/shortening, and I never bought for one minute that Eliza was actually stressed, although the whole story is an episodic series of Eliza sweating the small stuff. There is a tedious (unfunny) obsession with the challenge of parking in Brooklyn. Eliza's interactions with friends and neighbors is affected, and the entire pace of "Motherhood" drags and often feels more like a play.

I'm sure many women will relate (or commiserate) with Eliza and find the movie amusing and even consoling: You are not alone! There is a great sisterhood of motherhood and we're all having a bad day together! The theme, question and thread throughout is: "What IS motherhood?" or rather, what does Eliza think motherhood is? She must answer this question for a Mommy blog contest she's entering—if she ever gets enough time to sit down and write.

So, when does "Motherhood" get good? When Eliza and her husband have a heart to heart, and he helps her get in touch with her truest beliefs about maternity. Eliza and hubby Avery are not on parallel tracks or living in their own pragmatically intersecting worlds. Eliza can only really define herself in relation to him and the kids and vice versa. Here's an important point for feminists: Men, husbands and fathers also define themselves in relationship to women (or should). When Eliza is envying Avery's seemingly easier life, he reminds her of all the sacrifices fatherhood requires of him, his own dashed dreams, and how they made their decisions TOGETHER to lead the life they're living.

Today's women are smart. They are grappling with the often unattainable dreams of "having it all," and the realities and requirements of motherhood. There's a new T-shirt that riffs of the 70's women's lib anthem: "I am Woman. I am strong. I am invincible. I can do anything. I am tired." Many women are unapologetically opting out of the workplace to be stay-at-home mothers, at least while their children are young. When Clara begs her Mom not to get a "real job," Eliza asks her why it's OK for Daddies but not Mommies. Her daughter answers: "Because Daddies just do some things, but Mommies do everything." (And Eliza had been wondering if her kids even noticed all she did for them!)

It's a serious concern that "Motherhood" raises: How DO women retain some time for themselves, maintain a personal creative outlet (that will make them better Moms) within "ridiculously tiny wedges of time"? You'll have to see the movie for suggestions! (Hint: kids have a lot to teach us.)

Theology of the Body is evident in the mutuality of Eliza and Avery's relationship. But "Motherhood" is nonplussed about how to deal with sex, so it goes with the present culture: sex is trivialized. BUT always with that "echo" and longing and intuition that maybe it does mean more than simply "wanking off."

--One of my close friends, a single mom, tells me: "Motherhood was NEVER meant to be done alone!"

--In a sense, "Motherhood" deals with the opposite problem of "The Feminine Mystique's" ennui!

--The punk-y soundtrack ain't bad, but it's sometimes employed in a disjointed, mildly intrusive way.

--"Collins makes her strongest case, and showcases her finest writing, on the subject of what feminism has not been able to do. It is not easy to attentively raise your children while holding down a good and demanding job. Feminism did not remake the world of relationships. It did not change the fact that when Julia Roberts's adorable hooker was carried off by Richard Gere's handsome businessman at the end of "Pretty Woman," none of us would have preferred to watch him rest his silvery head against her lovely shoulder, snuggling, safe at last in her strong arms. Feminism did not resolve the conflicting desires for passion and domesticity, familiarity and romance." (Amy Bloom's review of new book: "When Everything Changed—The Amazing Journey of American Women from 1960 to the Present" by Gail Collins.)

--"I used to write fiercely lyrical prose, now it's mostly everyday stuff." –Eliza bemoaning her lack of time for writing. "It is more original to give life than to create." –JP2G, "The Irradiation of Fatherhood." "Art should be an affirmation of reality, not a denial of it." –Sr. Helena

--"I believe that women themselves, with their energy and strength, with their predominance, so to speak, with what I would call their 'spiritual power,' will know how to make their own space." –Pope Benedict XVI (re: the fact that, according to canon law, the power to take legally-binding decisions is limited to sacred orders)

--"When she has catered adequately for her home, then and only then can woman look outside it to enlarge her influence for doing good. By doing this, women, who constitute what is often erroneously termed 'the weaker sex' become the hidden, true creators of a nation's strength, prosperity and progress. 'Cherchez la femme—look for the woman' says the well-known French proverb. Would you understand any country aright? Then study its women, for no nation can rise higher than the daughters of Eve who are found within it." ---Blessed James Alberione, SSP, Christian feminist

--Clara's 6th birthday party: Women ARE memory, nostalgia, sentimentality. Women remember. "Mary treasured up all these things and pondered them in her heart." Luke 2:18-20

--Why do we (women especially) have such a hard time defining "the mission of women," "motherhood"? I have experienced this in Theology of the Body study groups, and suffer from this myself!