POPE BENEDICT AND THE NEW MEDIA (HE TOTALLY GETS IT) 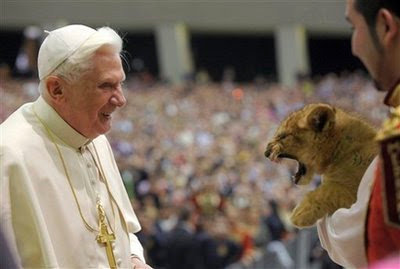 Church must adapt to the way media are impacting culture, pope says
By Cindy Wooden Catholic News Service VATICAN CITY (CNS) --
New media are not just instruments for communicating, but they are having a huge impact on culture -- on the way people interact and think, Pope Benedict XVI said."This constitutes a challenge for the church, called to proclaim the Gospel to people of the third millennium," the pope said Oct. 29 during a meeting with members of the Pontifical Council for Social Communications. The content of the Gospel message remains unchanged, he said, but the church must learn how to transmit that message to new generations and must do so by taking advantage of the new technology and new attitudes toward communications. Pope Benedict said one of the marks of the new media culture is its multimedia and interactive structure.
New technology is not leading to developments only in television or radio or the Internet, but is "gradually generating a kind of global communications system" in which media are used together and the audience participates in generating content, he said. "I want to take this occasion to ask those in the church who work in the sphere of communications and have responsibility for pastoral guidance to take up the challenges these new technologies pose for evangelization," the pope said.
Pope Benedict encouraged all producers and users of media "to promote a culture of respect for the dignity and value of the human person, a dialogue rooted in the sincere search for truth (and) for friendship that is not an end in itself, but is capable of developing the talents of each person to put them at the service of the human community. "The pontifical council, he said, is called to study the new media culture and offer Catholics ethical guidance so that they recognize the importance of the communications media and use it effectively to spread the Gospel.