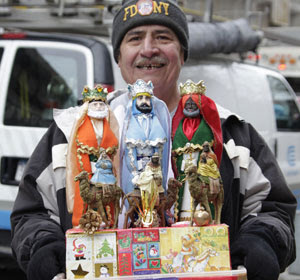 Wise Men Were Truly Wise, Says Pope
Notes Willingness to Mix Science and Faith
VATICAN CITY, JAN. 6, 2010 (Zenit.org).- The Wise Men from the East were not afraid of what would today be considered the "contamination" of science by the Word of God, says Benedict XVI. Instead, they were truly wise, avoiding self-sufficiency and ready to seek answers from others. The Pope reflected today on the true wisdom of the Magi when he addressed those gathered in St. Peter's Square to pray the midday Angelus."The Evangelist Matthew […] stresses how the Magi arrived in Jerusalem following a star, seen at its rising and interpreted as a sign of the birth of the king proclaimed by the prophets, that is, of the Messiah," the Holy Father said. "Arriving in Jerusalem, however, the Magi were in need of the indications of the priests and scribes to know exactly the place where they should go, namely, Bethlehem, the city of David. The star and sacred Scriptures were the two lights that guided the way of the Magi, who appear to us as models of genuine seekers of truth."
The Pontiff noted how the Magi were wise men who "scrutinized the stars and knew the history of peoples.""They were men of science in a broad sense," he continued, "who observed the cosmos regarding it almost as a great book full of divine signs and messages for man."But, the Pope affirmed, their learning, "far from making them self-sufficient, was open to further divine revelations and appeals. In fact, they were not ashamed to ask for instructions from the religious leaders of the Jews. They could have said: We can do it alone, we have no need of anyone, avoiding, according to our mentality today, every 'contamination' between science and the Word of God.
"Instead, the Magi listened to the prophecies and welcomed them and, no sooner were they on the way to Bethlehem, than they again saw the star, almost as a confirmation of the perfect harmony between human seeking and divine Truth, a harmony that filled the hearts of these genuine wise men with joy."SurprisedThe search undertaken by the Magi culminated "when they found themselves before 'the Child with Mary, his Mother,'" Benedict XVI added, noting that this was a further indication of their humility."They could have remained disappointed, even scandalized," he said. "Instead, as true wise men, they were open to the mystery manifested in a surprising way, and with their symbolic gifts, demonstrated that they recognized in Jesus the King and Son of God."The Pope pointed to a final detail to confirm "the unity between intelligence and faith: It is the fact that 'warned in a dream not to return to Herod, they departed to their own country by another way.'"
"It would have been natural to return to Jerusalem, to Herod's palace and the Temple, to proclaim their discovery," he said. "Instead, the Magi, who chose the Child as their sovereign, protected him in concealment, in keeping with Mary's style, or better, with that of God himself. And thus, as they appeared, they disappeared in silence, content, but also changed by the encounter with Truth. They had discovered a new face of God, a new royalty: that of love."The Holy Father concluded with a prayer to the Mother of Bethlehem: "May the Virgin Mary, model of true wisdom, help us to be genuine seekers of the truth of God, capable of living always the profound harmony that exists between reason and faith, science and revelation."

Email ThisBlogThis!Share to TwitterShare to FacebookShare to Pinterest
Labels: faith and reason, faith and science, magi