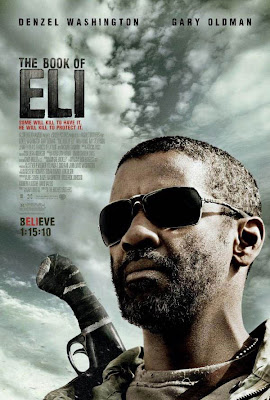 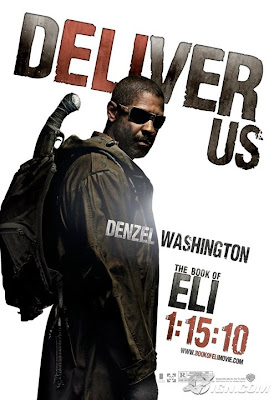 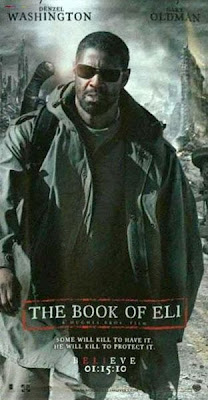 YY 1/2
The latest in quite a spate of bleak apocalyptic (and post-apocalyptic) films, “The Book of Eli” adds a new dimension. Eli (eye-candy Denzel Washington, altho’ a bit scruffy here) is a lone wanderer in a post-war-to-end-all-wars America. But his meanderings have a goal: go West. Actually, the whole movie feels like the Wild West, complete with gun-slinging, saloons, shootouts at high noon. In his backpack, Eli carries a precious Bible, the last on Earth. How he knows that, well, just go with it or you won’t enjoy the movie. And you assuredly won’t enjoy the movie if you don’t like violence. Lots of righteous, blood-spurting, creative violence with surround-sound sound effects. This is pure violence as pure entertainment. The folks in my theater were laughing at the worst of it. Not because it was ludicrous or because the audience was insensitive, but because, somehow, it was meant to be funny in some absurd way. Perhaps it’s really a sarcastic violence more than anything. There are several completely unnecessary and ill-placed F-bombs on the lips of the man who wants Eli’s Bible for nefarious reasons, Carnegie, (Gary Oldman being his excellent, villainous bad self) and his henchmen.

How could a Bible be used for evil? Well, here’s where “Eli” gets interesting. Some say the Bible was used to start the Big War, but without saying how. (Made me think of those fundamentalist Christians who are eager to initiate Armageddon in the Middle East so Jesus will come back.) Carnegie wants to use it to control “the minds and hearts” of the survivors. Any which way, the Word is powerful. And can make people powerful for good or not so good. It is a “two-edged sword” in more ways than one. “Eli” seems to be saying that the Word can be the blueprint for a just, kind, ethical society OR, perhaps, for a brain-washed, kept-down, homogeneous, controllable society. The Word of God (as He once put Himself in our hands as a helpless Baby, and is now in our hands as even more vulnerable Bread) can be used any way we choose. For now. The fact that the Detroit-based Hughes Brothers (twins!) made this film (one an atheist, one not), makes the story all the more intriguing. Are we detecting input from both?
It’s a kind of message film, but it’s clever. It makes you think. The rest of the movie? It’ll keep you hanging on to see what happens, but as one of our Samoan sisters (who’s a big movie buff) says: “You can always tell an American film from a European film. The American films are sooooo unrealistic!” But Denzel pulls it off as few others could.
In one way, “Eli” is about books. The future of books, the preservation of books (and literacy for that matter). But are books and even words sometimes being treated as “things,” as “objects” by Hollywood? Sci-fi and apocalyptic movies (e.g., “The Day After Tomorrow”) always dutifully mention and/or show all the classics that would have to be salvaged for civilization, but does anyone today even want to read books? If Hollywood cares so much about literature and books and words, could dialogue in films possibly be more nuanced, intelligent, thought-provoking, diverse, expressive? The “Bible-as-literature” is perhaps the best a pluralistic society can do, and we cannot deny the Bible as part of the fabric of the founding of America, but the Word of God is so much more. God demands our total selves, our total allegiance, like ancient Israel achieved at times in their history, and as our other siblings of Abraham, our Muslim brothers and sisters, remind us by their devotion. 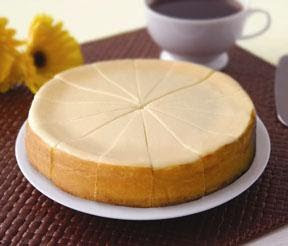 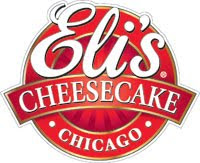 --Who did I sit beside at the screening of “Eli”?? None other than the proprietors of Chicago’s own, all-natural, scrum-diddly-umptious ELI’S CHEESECAKE!!! (They were giving out free cheesecake at the end of the film.) I didn’t make the “Eli” connection till I completely left the cinema. Duuuuuuuuuh! http://www.elischeesecake.com/
--One can’t help but think of Haiti, looking at the bombed-out environs. And—speaking of Haiti--has not Pat Robertson borne out the fact that one can mold God and His Word into weapon with one’s tongue at least?

--What is with Hollywood’s obsession (besides box office) with Doomsday? It’s kind of scary, because Hollywood is often prescient in its subject matters….
--It’s a known fact that those in the upper echelons of Hollywood actually do have a penchant for collecting rare books.
--“Eli” gets off to a very slow start.
--Eli wears Mardi Gras beads.
--Shadows of the time of Ezra and Nehemiah in the Old Testament, when the Jewish people re-find the lost Law/Scriptures.
--The costumes? Very tailored, very chic “Apocalique,” (remember “Derelique” homeless fashions in “Zoolander”?). The chick with the broken shopping cart has a Cyndi Lauper vibe. And excessive use of “Is that you behind those Foster Grants?” pilot sunglasses.
--Machete vs. chainsaw? Goliath goes down.
--What’s valuable in the future?? Hot stock tip: Chapstick.
--Denzel Washington is just so great, isn’t he? One of the best actors of his generation, crowd pleasing, versatile, oozing integrity, raises the bar of any movie he graces. I read in the New York Times Magazine once that he projects the persona of the kind of man women trust, because they can tell he’s a “good man.”
--On second thought, the violence IS a bit ridiculous when nobody gets hurt. I wonder what our Iraq/Afghanistan vets think of this kind of portrayal of violence.
--From a Media Literacy point of view, is the outré violence just a money-making element or do the movie-makers feel it’s an intrinsic part of the work? Is violence the sugar to make the medicine of God’s Word go down?
--Like "Avatar," is exciting, entertaining violence being used to tell us violence isn't the way?
--I couldn’t help thinking: bread and circus, bread and circus. Is that where we are as a society? Have we just accepted violence at some fundamental level?