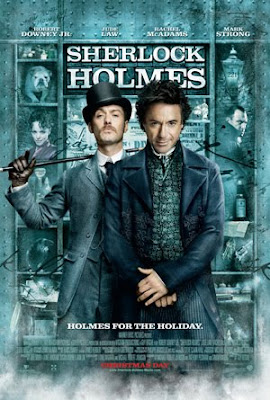 The movie "Sherlock Holmes" is many things, as is the old boy himself. This new take on the world's most famous and favorite pipe-chomping sleuth is: a macabre-lite dark comedy; a psychological/crime/supernatural thriller; as well as an action-packed detective period-piece. Holmes (the always fabulous Robert Downey, Jr.) is an inventor, a recluse, a spy, a master of disguises, a scientist, a genius, an eccentric, a musician, a cold and calculating misanthrope, an able-bodied fighter (in some respects a hybrid of "Monk," "Psych" and "House"). He teams up with a youthful Dr. Watson (Jude Law) to solve mysteries (crimes) that interest him and thus do good for England and humanity.

Their friendship is a type of mutual admiration society, though Watson always seems worse for the wear due to their acquaintance. The only thing that comes between them is Watson's impending marriage (which will break up their well-oiled team), so Holmes does some obvious and ill-appreciated (by Watson) sabotaging of the relationship. But Holmes' life is not devoid of romance either. An old flame (Rachel McAdams) with a shadowy, wrong-side-of-the-law past resurfaces and unsettles Holmes in more ways than one, setting him off on what turns out to be a world-saving endeavor.

What's in it for Holmes? It's all a very serious game for him (and Watson can't resist the lure of whatever his friend is up to, either). But Holmes also seems to feel the pull of the dark side and must keep himself in check. The new "SH" involves lots of chases and firing of pistols and oh-so-debonair Victorian haberdashery punctuated by clever, witty--although ear-straining--British banter. What better way to introduce a new generation to Sir Arthur Conan Doyle's indelible, quirky investigator? If the public votes with their wallets, there will be sequels ("SH" ends as a very ripe cliffhanger, or "suspension bridge hanger"). If it works, director Guy Ritchie got away with a rather "intelligent" movie. It's great fun to listen to Holmes spilling about what clues he uncannily observes and puts together, as well as his mental sparring with the good doctor.

In the end, reason, logic and good science (used in the employ of the good) defeats fear, hocus-pocus and techno-madness. Elementary, my dear Watson.

--It took some getting used to Downey's New York Italian looks and diminutive body-type filling in for Holmes, but in the end, it flies. As much as I loved watching Basil Rathbone as a kid, I tried it again recently, and it is insufferable.

--I think if we get sequels (j'espere!) the characters can be developed even more.

--Downey has turned Holmes into a bit of a magician in the way he deports himself. Nice.

--What's with the, like, 37 references to the "ginger midget"? This is especially unfunny after "South Park" fans (zombies) beat up red-headed kids at a school in California.

--There is a bit of a comeback of all things Victorian these days. See this insightful article about "steampunk" (named for all those steam-powered pistons, gears and whirl-a-gigs on Victorian machines): http://www.time.com/time/magazine/article/0,9171,1945343,00.html

--The soundtrack tells the story so well! It's like a story in stereo: visual and audial! You could close your eyes and write your own story to it.

--How come all the fight scenes have IRISH music playing?

--WAY too many ravens.

--(Lord Blackwood) It just dawned on me that the devil never promises what he can't give. He only promises what he CAN give in THIS life. He never even falsely promises eternal life—the thing we're all supposed to want. Only Jesus promises (and delivers) eternal life. And we are so STUPID that we're willing to settle for this life only. Blast! How dumb can we be? Thank God HE still loves us. BTW: "Revelation 1:18" is about JESUS—may He always be praised--not Old Scratch.

--Movie is a tad long. That really long fight scene with the French giant and the ship slipping into the water was boring and took us out of the story.

--Ooooh! It just dawned on me—when SH sees Mary's ruby-diamond necklace in the rubble, was that plot point ever tied up? Or is that for a sequel? I'll betcha Mary is T-R-O-U-B-L-E. I'll betcha she's a plant of…curse you, Professor Moriarty!!!

--Although I liked this movie, a review on www.rottentomatoes.com called it "SH for the ADD generation...jerking and twisting..." which I totally agree with!