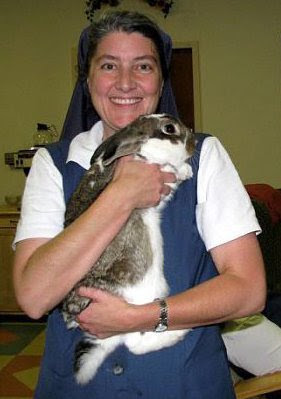 Sr. Frances Aurelia, fsp (aka Sr. Mary Cottontail)
I have never been a fan of rabbits. They have always seemed too nervous, quiet and boring to me. I also associate rabbits with pain, mostly after reading Watership Down, and just knowing that rabbits are basically, well, prey. So when an orphaned brown bunny landed on our Los Angeles rooftop patio (I mean, was adopted and put there by a bleeding-heart superior), I was non-thrilled. However, another sister I live with is a charter member of the rabbit fan club, had kept bunnies before, and possessed voluminous knowledge of them, which she proceeded to download into my cranium.

First off, rabbits are not rodents. Have you ever noticed how elderly people seem to have a fixation with, and horror of rodents? To them, anything that looks like a rodent IS (e.g., a Chihuahua), and all rodents are really rats in disguise. My theory about this is that the elderly generation is closer to the farming generations, and rodents were a Big Threat in days of yore (like getting into the silo and infecting cows with rabies). Also, the farming generations that tried to “do better” for themselves by moving to urbia and suburbia had to prove they weren’t yokels, which meant keeping their dwellings (and fingernails) meticulously clean, minding their table manners, etc. Rats in the house became a Big Threat to their new image, and as an initiation and pledge of allegiance to polite society, they had to rant and rail against all rodents. But that's just my theory.

Rabbits belong to the Lewis Carroll-sounding order of “lagomorphs,” and--like Tigger in Winnie the Pooh--“they’re the only ones!” If you really study their odd little forms, they look like some early phase of an evolving horse. Anyhow, it works for them. I once heard a sermon on rabbits by a priest who raises them. He said they are the holiest animals because they never commit incest, and if they and their surroundings are not kept extremely clean, they will die of filth. However, there is one utterly grotesque aspect of being a rabbit, and that is cecotropes. Rabbits have two kinds of poop: edible and inedible. The cecotropes are the edible poops that they eat right out of the dispenser. Oh boy. Not only are they edible, they contain necessary B-complex vitamins and protein for the lagomorphs’ diet. At least it’s convenient (for the bunnies) and saves on buying pet vitamins (for the humans).

Fallacy #2: Not all bunnies like carrots! Some just prefer greens, apples and, you guessed it, cecotropes. Like cats, domestic bunnies use a litter box, are constantly cleaning themselves, and are very curious. Like dogs, they are very affectionate; can be trained to “come,” “sit up and beg”; and they like to run around and play. Like cats and dogs, they like to be petted. Like chimpanzees, they like to be groomed, and the more you participate in the grooming process, the more you will bond and the more they will think of you as a fellow lagomorph.

However, all I ever saw was "Shoelaces”--as our bunny was previously named (wonder if it had something to do with nibbling)--lying around in the shade: drowsy, wiggling his nose, and dissipating heat through his ears. (Like good crepuscular animals, bunnies are most active at dawn and dusk.)

One night when Sr. Mary Cottontail, the bunny expert, was away for a few days and I was babysitting Shoelaces (aka Cinnabun, Buns of Steel, Honeybun, Pasquale and Colombo--each nun has her own name for him)--I decided to let the poor animal out of his cage to run around the patio. I was warned against this by Sr. Cottontail because: a) he won’t want to go back in b) he’ll eat all of Sr. Thecla’s succulent plants c) if I try to pick him up and don’t hold his powerful hind legs properly, he could kick and break his back (we are not making this up). But fools rush in, and in spite of these dire possibilities, I unlatched Shoelaces’ cage door. It was worth every risk to see the little frisker thumping and leaping for sheer joy. Being prey, he kept to the patio walls behind the rows of potted plants, and raced back and forth like a pack of hounds were after him. When it was time for him to go back in his cage, I tried unsuccessfully to get near enough to pick him up. Nothing doing. So I gave up and went over to cover the parakeets’ cages for the night (a much easier, predictable and satisfying task). Suddenly, there in the moonlight, Shoelaces came over and started running tight little circles around me, first this way and then that (a sign of affection, Sr. M.C. later informed me). When I would bend down to grab him, he would do his Lucky Charms sideways jig-kick and hop off. As I pursued him around the patio, he would dart out from nowhere and run between my feet, tripping me. Nervous, quiet and boring, eh?

Didn't he know I meant business? Didn't he know that I was too jaded for this mischievousness? Like a little child befriending a giant, grumpy ogre, Shoelaces kept at it until he had a playmate. Satisfied, he meekly submitted to a nose rub (when you don't rub in the right place, rabbits nudge-adjust your hand), and then bounced back into his cage on his own.

The moral is: Don’t judge a book by its cover. When you think you have someone/something all figured out (including yourself): Go figure. When you think you’ve simplified life, it comes back a hundredfold in all its incredible complexity. When you think you're completely sold out to cynicism and routine, life has more surprises up its sleeve. And every time you think you’re immune to shock or serendipity, God sends an amazing, splendiferous lagomorph.