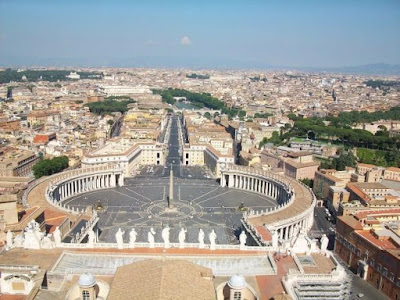 Is there such a thing as being too safe? I think so. Americans have to be the most coddled, mamby-pamby, timorous ninnies on the planet. I came to this conclusion in the cupola of
St. Peter's Basilica in Rome, or, more exactly, on the way up to the cupola of St. Peter's Basilica. Let me explain. I am under 40, in reasonably good shape, and within 10 lbs of my ideal weight. I opted to ride the elevator halfway up to the dome and then take the stairs the rest of the way (your only option after the elevator ride). Well. I still would have done it, but it would have been nice to know what I was in for. The stairs are one-way, single-file, as twisty as a curly fry, and there's a heck of a lot of them. Once you start, you can't really stop because there are people behind you. You could, I suppose, turn around and descend, squeezing by everyone on the way, but, oh, the shame of it. It would be like going back down on a ski lift because you can't hack a slope.

As you climb the stairs, the air gets kind of thin, you have no idea what's ahead (visibility=100% plaster), how much longer it will be, and, worst of all for claustrophobes like me, the walls begin to close in the higher you go. No, it is not an optical illusion: the wall and ceiling curves more and more until you are leaning sideways in what must be some advanced yoga position, lifting your huffing frame by your hip and lower back muscles, step by step. You begin hoping that since they have a Vatican gift shop on the roof, maybe they have a Vatican chiropractor's office in the cupola.
The sister I made the holy trek with was not in as good shape as myself. She is over 40 and not within 30 lbs of her ideal weight. She also refused to take her winter coat off which didn't help matters. At a certain juncture, she sat on the stairs (regardless of the shame), sweat profusing down her pasty face. "Are you OK?" I asked. She groaned in reply: "I'd better be. Even if I wasn't, how would the paramedics ever get me out of here?"

When we finally made it to the summit, it was certainly worth it. In addition to the graffiti in every tongue known to homo sapiens, the view was astounding. Not that we were now "safe." The observatory ledge was as narrow as the stairs, with an exquisite, delicate, skimpy iron railing. It had to be the world's most ideal site for a lover's leap or suicide launch pad. One false step and you could find yourself crashing through the Vatican gift shop skylight, or joining the array of apostles and saints on the colonnade below--a martyr of High Renaissance architecture. And the rain was making everything as slippery as a water slide. As I perused the Vatican Gardens, the Tiber, and far, far beyond, all I could think of--as a good American--was: man, they could be sued blind, dumb and stupid for not even having a sign to warn tourists of the dangers! There was no: "Persons with heart conditions, respiratory difficulties, fear of heights, major obesity, fallen arches (or whatever) should consult their doctor before proceeding." There was no: "The one, holy, Roman, Catholic, apostolic Church is not responsible for the misfortunes that may befall you on the journey you are about to undertake--signed, Cardinal Aspetta Minuto, substituto." Not even an: "Enter at your own risk!" I had to know why not. So, like a good American, I used my good old American common sense: Maybe, just maybe, "they" thought we were grown up enough to make our own safety decisions! Maybe, just maybe, "they" thought adults were responsible for themselves and their own actions! Maybe, just maybe, even if someone did sue, the case would get tied up so long in draconic, laissez-faire, different-headed, inefficient Roman courts (or get laughed out of them) that it wouldn't be worth the while. Hmm. Maybe the litigious American system was the screwy one! I actually felt honored that "they" thought I had a brain in my head and could figure out (at some point, at least) whether or not I could take on the cupola challenge! I felt empowered, respected, mature. The more I thought about it, the more I liked Europe. They were downright reckless over here!

The USA might be safer--but is it? We eat plastic, nutrient-free, genetically-modified food; kill every microscopic organism good or bad with pesticides, antibiotic, mouthwash and Purelle. Our cows may not be mad, but they are hormone-filled. If our children exhibit vital signs they're diagnosed hyperactive and pumped full of drugs. We clog our armpit pores with chemicals, virtually injecting them into our lymph nodes and wonder why we get breast cancer. You know I could go on with a list of our bizarre behavior. Europeans eat real food, fully engage their surroundings (we need only think of St. Peter's cupola and Roman drivers), practice moderate-to-minimal hygiene, show their emotions, and eliminate toxins from their bodies by--imagine this--sweating where we were born to sweat! Real food, real risks, real B.O., real living!

I began remembering the good old days in America (the 70's) when toys were unregulated and could cause serious bodily harm (real bows and arrows, real hotplates to melt plastic, etc.). Seatbelts were optional and riding on tailgates was a treat for kids. The good old days when you took your chances getting out of bed every morning, and took responsibility for those chances. Now it's the great American blame game: McDonald's sued for hot coffee burns (the customer held the cup with her thighs--"duh" doesn't even begin to express it). Twenty-eight billion dollars awarded to a woman with lung cancer from tobacco king Philip Morris because--who woulda thunk it?--smoking kills! What can one (terminally ill) person do with all that money anyway?

Is it just me or does anyone else feel like they're living in a bubble? Safety measures have become tyrannical in this country. "They" are trying to make us afraid! Fear is good for the economy! Once we succumb to total paranoia (for our own good), "they" can paternally take care of us, control us, that is, tell us what to buy to be safe, or even better, require us to buy to be safe! Safety is big business! (Being a bit of a conspiracy theorist myself, I believe that germs are an invention of Madison Avenue.)

I would like to take this time to thank the custodians of the Patrimony of St. Peter for the lack of signage at St. Peter's cupola--a true monument to life, liberty and the pursuit of happiness. Forever in peace may it not wave.