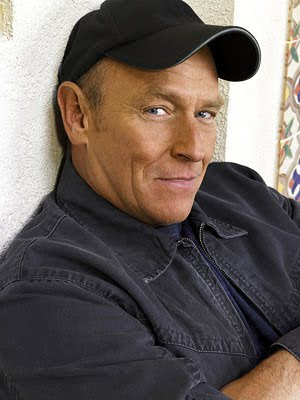 Recently, I had the privilege of interviewing Corbin Bernsen (Yes! Sean's father on "Psych"!) about his new movie, "Rust," releasing on DVD October 5.

First of all, the story of "Rust" is probably the most unique story of the genesis of a movie EVER. http://www.rustmovie.com/ Do you remember several years ago that guy in Montreal who wanted to see how far he could get bartering online? He started with a large red paper clip and wound up snagging a house. Well...that house was bartered away for A PART IN A CORBIN BERNSEN HOLLYWOOD MOVIE. It involves a collector's item KISS snowglobe, so it gets a little complicated, but here's the kicker: it was actually the WHOLE TOWN of Kipling, Saskatchewan, CANADA, (population 1,100) who bartered the house. Therefore, Corbin decided that the whole town had to have, and star in, a movie of their own. And that's exactly what "Rust" is.

"Rust" is a term used to describe a crop blight, but also what's happening in the life of an ex-minister, Jimmy, returning home after a long absence. There's a developmentally-challenged adult in town, Travis, who gets blamed for a tragic fire (this actor totally steals the whole show). Nothing is making sense in Jimmy's life, and there are hard-hitting questions from the past to be dealt with, all swirling around the ever-present underpinnings of the classic problem of evil--as persistent as permafrost. The long shots of snow--although beautiful--speak to the deep freeze in Jimmy's soul. He is surrounded by a warm, rooted community who nevertheless have dark flaws of their own. The town needs a light, but Jimmy is too immersed in his own dark night to be that beacon for them just yet.

There are some interesting relationships, explored in an original way in the film, such as Jimmy's empathetic sister, the old minister Jimmy goes to to hash out his problems, Travis--his buddy from youth.

The actors are so natural and raw that it's a welcome respite from anything polished. Canadians are truth-tellers any way, so the unvarnished "performances" are doubly authentic.

The tagline is "Sometimes losing the path...is the only way back," but I prefer a line from the film: "It's not ours to question the plays, but to play the game. God has his plan." And there's more where that came from, but you'll have to watch the movie.

Here's my interview with Corbin (after telling him what a fan of "Psych" I am!):

SrH: Since "Rust" has a such a unique backstory, did you think of taking film to do a "making of"?
C: Funny you should ask! Yes, we did, and yes, we're going to do a documentary. [So Sr. Budinski later TEXTED CORBIN a title idea: "How about 'The Town That Made a Movie'?" Corbin replied: "Not bad." (Do NOT ask me for his cell phone number.)]

SrH: Why did you write THIS story for THIS town?

C: It's semi-autobiographical. My father passed away, and I've been on my own journey with that.

SrH: So, at the end of the film when the words come on the screen: "For Father," it's for your Dad? [I actually didn't get that feeling when I saw the film, it felt to me more like God the Father.]

C: It's open to interpretation. [Random sidebar: Corbin also has four boys of his own.]

SrH: How has Jimmy's struggle and the words of wisdom in the film played out in your own life? What religion are you and where are you from?

C: I was raised Christian Scientist in Los Angeles. I'm not what I would call "practicing anything," but I've always known God was there, all my young adult life. There's always been a sense of role-play in my life. I didn't go to church, but I always communicated clearly with God, for example, running marathons--you get closer to things, but just not in an organized sense. See what's going on now. The country is so divided. But everyone's trying to get to God. I believe God has a plan for me, not MY plan, clearly. With this movie, I want to bring more people into the discussion, the philosophical discussion. It used to be commonplace for people to go to church on Sunday, but now we're going to the store to buy large screen TVs. But with the economic downturn, people are having to live more simply, maybe return to God.

I don't identify as a particular denomination, but I don't want to sound like I'm sitting on a fence. I'll leave it up to others to say what I am. A "Christian"? I just want to follow the journey.

I always see the good, the silver lining, I always believe there is good around the corner, a rose around the corner. I love flowers. Children born with tiny fingers. Each thread is a part of a larger blanket of God's grace. Even the most devout Evangelical Christian doesn't see the whole picture. We can never be close enough to God, to light. In the weirdest, darkest times of my life, there has always been a rose. After the freeze, there will always be a thaw. I hate to say that there's a "message" to this film--I think of it as a kind of primitive folk art, but if there would be a message, it would be simply this: HAVE FAITH. HAVE FAITH.

"Rust" will be available October 5 from Christian retailers, Walmart, Amazon, Netflix and others.