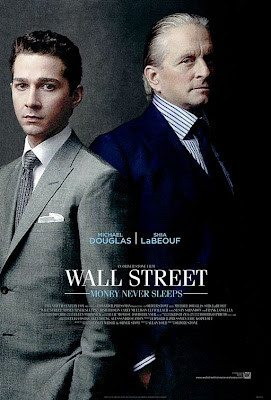 This is an excellent movie. A lush, talkative New York film, done up in an older dramatic realism style (that I miss) which caters to a longer attention span. Lengthy conversations—that are not boring or verbose but rather absolutely necessary and organic—demand the very finest acting from the very fine cast. Each actor nails their part. Shia LaBeouf (Jake Moore) is winning, and those of us who feel nostalgia for Michael Douglas (boy does he look like his father now), are so happy to see him shining once more--larger than life despite his real-life cancer--one of our best American actors. In fact, the mix of young talent (LaBeouf, Carey Mulligan) with seasoned stars (the great Frank Langella, Susan Sarandon) is a rare delicacy we should be hungry for more of! There is one small scene of Jake with his mother (Sarandon) that just screamed Oscar! What I’m trying to say is that we haven’t seen dialogue like this in a while that actually imitates real life—people speaking quickly and naturally, interrupting each other, and filled with logical, yet unexpected emotional reactions. What a concept! Definitely a film for grown-ups. Reminded me of Robert Altman’s work, except nothing seems ad-libbed. Today’s visual effects/sound blended with old-school masterful timing and pacing makes “Wall Street 2” a sensory delight. (With absolutely NO explosions! Yay!)
This sequel to 1987’s classic “Wall Street” segues smoothly. This achievement is probably due to the fact that Oliver Stone got to make his own sequel (not everyone does)! Stone’s father worked on Wall Street, and Stone captures the financial world so well. Gordon “Greed is good” Gekko has been released from prison, and things have certainly heated up at his old playground. 2010 couldn’t be a riper time for another look at how the money markets (dysfunctionally) operate. Gekko sums up what has changed since his absence: “Now greed is also legal.”
Gekko’s estranged daughter, Winnie (Carey Mulligan), is marrying Jake. Gekko is using Jake to reconnect with his daughter, and Jake—although a trader with a conscience—is out for vengeance against whoever destroyed his mentor’s (Frank Langella) company and life, and is using Gekko to that end. Gekko and Winnie both warn Jake that he is acting an awful lot like Gekko used to. But has Gekko actually changed? Do people like Gekko change?
In typical Oliver Stone fashion, there’s lots of big, intense thinking-out-loud going on about mega-issues, all the way back to…wait for it…the Cambrian Explosion! The connection? Bubbles. Where do these pesky bubbles come from? Then he launches into, or rather situates the question of humanity (and therefore ethics) in a Darwinian framework, leaving a slight possibility for “design” rather than “chance.” I feel a rant coming on!!! I am soooo sick and tired of almost every single newspaper/magazine article referencing evolution! They could be talking about potato chips and suddenly there’s some desperate attempt to connect to a bigger picture (not a bad impulse) and an attempt to posit the theory of everything right there on the spot and all it winds up being is a very minimalistic, impoverished view of blind nature blindly leading us. Yuck! Where are the Victorians when you need them? The Victorians with their reading of science as the grand divine order of which we are the crown with our magnificent works of art and ability to appreciate the BEAUTY in nature and the ability to CREATE BEAUTY modeled on nature which they did and thank God their truly beautiful works of art and textile and architecture are still extant. End of rant.
To his credit, Stone sincerely makes more than one heavy-handed reference to marriage and children being the only thing that really matters, not the money. And in the end, as Gekko explains how Wall Street really works (including housing bubbles, “moral hazard,” bail-outs, “too big to fail,” insider trading, you-name-the-buzzword), it’s not really about the money but the games between people (which I have long thought to be the case), and he doesn’t say it, but the game is really about power. How much more power can I acquire than the next guy, the next company, the next bank, just because I can, because I figured out how to do it (legally or illegally), and figured out also how not to get caught, and I have the guts to actually do it no matter who goes down because of it, even if it’s the whole country, the whole world? It’s kind of like the mob, where the only loyalties are not to friends or even kin, but just to the self left standing.
The ending is not a downer, but I didn’t buy it. “Wall Street 2” didn’t end with a bang but a whimper after such a great story, set-up and slow build. It looked very, very rushed up. In fact, the ending was so simplistic that it didn’t even really make sense, lots of threads hanging, inconclusions, dangling participles (and not the kind that are MEANT to be there, or are priming us for “Wall Street 3”). Pity.
OTHER STUFF:

--If you haven’t seen the old “Wall Street,” do. It’s not an absolute requirement for appreciating “Wall Street 2,” but it helps.

--There are some great lines, too. “Are you an idealist or a capitalist?” “Privatize the gains, socialize the losses.”

--The time-line is a little confusing. Toward the beginning of the film, the date “2008” pops up, and then there are a few stock market crashes. Fictional?

--Stone seems to be warning us that the next crash will be the crash to end all crashes. The End. This is how the world ends. Fictional?

--Stone puts his mug in the film more than once. Muy distracting!!!

--There was no physical drama, chases, escapes, hunts, etc. The drama was all in the human interplay. Well done.

--Prominently in the film, Winnie has a news website called http://www.frozentruth.com/ . Knowing Stone is a leftie activist (remember his recent film tribute to Hugo Chavez: “South of the Border”?), I checked out the website to see if it was some real thing that Stone wanted us to go to. Um, no.

A WORD ABOUT THE PREVIEWS:

--Yet ANOTHER Boston film is coming out about boxing starring Mark Wahlberg and Amy Adams.

--They are using Channing Tatum solely as beefcake in an upcoming rom-com. This is a great tragedy. The guy can really ACT, and my hope for him is that he could even start filling the “Russell Crowe roles” that only Russell Crowe can seem to fill.

--THEOLOGY OF THE BODY: In the same rom-com, a male character asks how he knows if he’s in love with a particular girl. Buddy says: If you only use a condom with all the OTHER girls. Pathetically sad, but do you hear the ring of truth here?