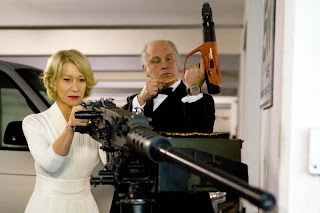 “Red” is a good time. A bloody good time. There’s tons of shooting and violence, but come to think of it, there’s not much blood, only a sizeable body count. This is tongue-in-cheek violence—not even earnest violence-as-entertainment, but violence as comedy. Am I making any sense? See, R.E.D. means “Retired and Extremely Dangerous.” Bruce Willis (Frank Moses) is R.E.D., the best C.I.A. agent that ever there was. He and his cronies (Morgan Freeman, Helen Mirren, and king-of-quirk John Malkovich) come out of retirement because something fishy is going on involving a hit list, a 1981 cover-up in Guatemala, and the Vice-President of the United States of America. Oh yes, and Frank takes along Mary-Louise Parker (Sarah)--a mousy government phone operator who reads spy-romance novels--whom Frank has been crushing on. (Willis and Parker are a delightful comedy-action team.) All Sarah can say is: “Wow!” as she lives the dream.
If you don’t like violence (ridiculous or not), you won’t like “Red,” and you especially won’t like seeing Helen Mirren firing round after round after round of machine gun volleys (she also expertly fires other automatic weapons) in her white evening gown. (At a certain point the noise was rivaling “Public Enemies.”) Me? Because this movie is from DC Comics—although our heroes don’t have ANY superpowers—the tenor of the violence just didn’t faze me one iota. I didn’t, like, WARM to the violence, or laugh at it (except the “real estate agent” with the RPG on her shoulder). Oh dear, maybe I’m jaded. Maybe there’s something in me like there is in Helen Mirren’s character who pretends to be content with flower arranging in her retirement, but finally admits to taking contracts on the side because she “misses the excitement.” But I wouldn’t want anyone to get hurt. And I certainly wouldn’t kill anyone. But the excitement part is attractive. Oh dear. Even truer confessions: After watching the trailer, I DID want to see Helen Mirren fire a gun. Oh dear.
Karl Urban plays William Cooper, Frank’s active C.I.A. nemesis, to perfection. You just can’t take your eyes of this guy he’s SUCH a good actor. Audiences should clamor to see more of him. At a certain point I realized one of the reasons he stands out. It occurred to me: this guy is hiding an accent. He’s dropping “r’s.” Sounds Australian, but could be British. Turns out: New Zealand. He doesn’t hold himself like an American, he doesn’t gaze like an American actor, doesn’t walk American, doesn’t make American facial expressions, doesn’t phrase American. There’s an intensity, a stick-to-the-part-like-glue quality about his acting that is more British. Anyway, he’s great. And he has “cute hair” (Frank Moses).
We are here, there and everywhere in “Red”: Chicago, New Orleans, Virginia, Florida, NYC, introduced by cheery postcards and local music.
Beneath the jocularity is a serious message about what our C.I.A. really does and is capable of. As in movies like “Syriana,” there’s a division between good guys and bad guys in the government system, and in “Red,” the real bad guys are the arms dealers, the private sector, the defense contractors. There’s a repeating Hollywood message here about how America can still be “good”: if individuals, even within corrupt systems, can do their conscience, do the right thing, and of course, put love and family first, and sacrifice all when required. Perhaps this is a much more sober movie than it originally appears to be. We’re not supposed to laugh at any of the true tragedies (like a massacre in Guatemala), but we are supposed to laugh at everything else. As Oscar Wilde said: “If you’re going to tell someone the truth, make them laugh. Otherwise they’ll kill you.”
Sometimes it feels to me like America is “whatever we want it to be.” Like we’re making everything up as we go along. Especially in our storytelling, in our American imagination. And I just kept thinking while watching “Red” how familiar we are with weapons of war (large-scale warfare is carried out in domestic settings in “Red”), and is it just a coincidence that we are fighting two wars right now as more and more violent movies (it seems) are hitting the theaters and I see every day in the news some other young Chicagoan or Illinoisan who has given their lives overseas? The attitude in these films (as well as all the uber-violent previews before the movie) seems to be: “It’s just violence.” Could Hannah Arendt’s “banality of evil” be applied here?
OTHER STUFF:
--Why isn’t “Red” in IMDB?
--Quite a few laughs in this movie.
--Kidnappee to kidnapper: “You can’t just go around duct-taping people. People are basically decent: talk to them.”
--This could have been a one-joke movie: Elderly C.I.A. operatives back in action. But it’s not. Not even with 93-year-old Ernest Borgnine in charge of a C.I.A. archives so secret it doesn’t exist.
--Frank’s entire house—decked out for Christmas--is COMPLETELY, COMPLETELY decimated by black ops. And it doesn’t even wake the neighbors.
--John Malkovich looks very old. And he’s only 57. And it doesn’t look like the make-up.
--A mildly-grisly hanging scene didn’t bother me. I’m beginning to worry about myself.
--Frank is accused by Victoria (Helen Mirren) of being “gooey on the inside.” Hmmm. Thinking of Theology of the Body, maybe that fact that our bodies are physically “gooey” on the inside is a message that we SHOULD be “soft” on the inside—vulnerable, malleable, able to be moved, tender….
--This is a good, OLD-fashioned spy-caper-comedy. People of a certain age will enjoy it more than others, being more familiar with Cold War and Vietnam War era tropes, as well as the aging actors. Mature, youth-challenged people were whooping it up in my theater.