MOVIES: "THERE BE DRAGONS" 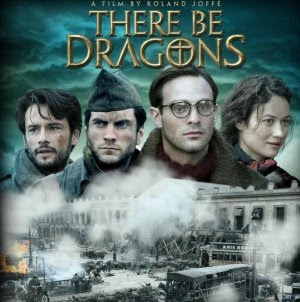 “There Be Dragons” is a film about many things, mainly the Spanish Civil War (1936-1939). Although St. Josemaria Escriva is a character, the film is not about him or the organization he founded, Opus Dei. The acting is pretty captivating, the art direction SUPERB, the cinematography solid, the music moving, the dialogue good and sometimes great, but the story has several major problems that break several of the most basic rudiments of filmmaking.

FIRST—Who is the main character? By all rights, it should be the character we are introduced to in Act One, who also happens to be narrating the story. He is a middle-aged Spaniard who is writing a book about St. Josemaria. Upon discovering that his father—who fought in the Spanish Civil War—actually knew the saint, we suddenly switch off to the father narrating the flashback story of his association with Josemaria. But the story of Escriva is quickly eclipsed by the far more exciting story (not just backdrop) of the war, and the writer’s father’s role as a spy for the Fascists (pretending to be a Communist) unfolds. But his story is quickly eclipsed by the far more exciting story of the dashing Communist leader (think Che Guevara) and his comrade lady interest whom the writer’s father is also in love with.

The author of the Escriva biography drops out of the film for almost the entire Second Act (except for a few quick “present-day” scenes where we learn how much he dislikes his father), then reappears at the very end when a BIG REVEAL takes place. But we are not interested in this character or his problems because we have not seen him for the entire movie. We barely saw him in Act One either, because we mainly just heard his voice narrating. His place in the movie is more “bookends” than main character. His father as a young man is an unsympathetic fellow. The Communist leader is committed and passionate, but the show-stealer turns out to be the young woman whom they’re both in love with. What is motivating a rather delicate-looking woman to take up arms and fight this fight? She seems to have more depth and backbone than anyone else in the film.

The film-Escriva is a one-dimensional, angelic person, seen through the eyes of the unsavory double-agent-author’s-father who grew up with Escriva and was in the seminary with him for a time. The feeling one gets is that perhaps this movie started out to be about Escriva, but it was feared that a priest is not interesting enough to make a movie about, so we will simply watch him from time to time through the eyes of a more conflicted man. I think it would have worked better to have Escriva be the main (developed) character and see the soldiers and other characters through HIS eyes.

Escriva is beloved, cheerful, unflagging, always at his priestly ministry, no matter the cost. He is pastoral and gives good spiritual advice. However, we do not seem him struggle, except for a few tears when a priest-friend is murdered. He seems to float above all the goings-on around him, ever smiling. (Charlie Cox, who plays Escriva is not at fault here. He does a great job with the character/lines he is given, and I’d love to see him in other vehicles. Seems he came back to his faith by playing this part!)

One thing we do learn from Escriva is how it is possible to be a Christian in the midst of war and forgive one’s enemies. We can see from his countenance (in a similar vein to war-survivor Blessed John Paul II) that Escriva was truly a man of charity and peace.

SECOND—Who is the bad guy? (The antagonist.) We are given such logical motivations for all persons and sides in the war, that any real venom is COMPLETELY removed. There may be generic “dragons in the land,” such as war, but nothing more specific or personalized than this.

THIRD—What is the story about? What is the takeaway? Or rather, what did I learn that I didn’t know before from watching “Dragons”? Sadly, I have to say that I know nothing more about the (albeit terribly complex and confusing) Spanish Civil War or St. Josemaria and Opus Dei than I did before. I was really looking forward to learning more about all three. There were many missed opportunities when we could have gained some insight.

FOURTH—What is the theme? I couldn’t decipher one, but we know at the end that it was intended to be forgiveness. The author must learn to forgive his father. But this theme did not permeate the rest of the movie. We did not even know there was anything TO forgive until the BIG REVEAL. The one scene of Escriva exhorting others to forgive in the midst of war was the only other reference to forgiveness. “Dragons” seems to be rather themeless. And because of this, I fear “Dragons” will ultimately be very forgettable. We will not be referencing much from it in the future.

The best lines in the movie are from an extremely minor character who has suffered much. She says: “I have accepted that God can be terrible. And now my prayers are deeper. I fight Him with love.”

Hopefully, “Dragons” will inspire audiences to learn more about St. Josemaria, Opus Dei, and the Spanish Civil War. It could be a great discussion starter if Opus Dei members and/or those versed in this segment of history would lead a forum after viewing. I, for one, am doing my own digging!

--Is “Dragons” worth seeing? Yes—if only to whet your appetite for more….

--The “Manolo Torres” character (the author’s father) is a purely fictitious character.

--Act One is choppy, choppily edited, and a little hard to follow.

--Good line: The Communist leader says he read many books in jail. The young woman says she hasn’t. “Then how do you know what life has to offer?” he asks her. [Book authors, lovers, publishers and sellers everywhere rejoice.]

--It seems like everything needed a little more exposition and a little more weight. Why would people risk their lives (including the priest) to avail themselves of the priestly ministry? (Mass and sacraments.) What position and platform exactly did the various sides in the war want/stand for? (Also, I don’t remember hearing “Franco’s” name even once, but I could be wrong.

--One might come away from “Dragons” thinking that the Communists weren’t so bad. There is still much (strange!) romanticism about Communism, and false-but-widely-accepted-notions that it’s the “religious wars” that have killed the most numbers in history. Time for enlightenment. Let the record speak for itself: http://en.wikipedia.org/wiki/The_Black_Book_of_Communism

--An elderly Opus Dei member told me that there was a famous movie starring Gary Cooper that gave the wrong impression (favorable) of the Communists during the Spanish Civil War (some Americans fought on the side of the Communists) which got stuck in the American public’s consciousness. Ah, the power of film!

--This same Opus Dei gentleman (I’ve been doing research with some of my Opus Dei friends) told me that the Communists (in other countries as well) always made allies of the Socialists and then killed them all. They did this prematurely in Spain, which lost them the war.

--The Church was ruthlessly persecuted during the war. 8,000 priests and religious were murdered.

--About the title: Although “There Be Dragons” sounds like a rap song, it’s a literal translation from the Latin, which probably could have been better translated to “There Are Dragons” or “Dragons in the Land” or something?

--A movie on St. Josemaria Escriva and Opus Dei is yet to be done! I can’t wait to see it!

--I know it’s very difficult to make a movie and very easy to be a critic…but I did so want to like this movie.