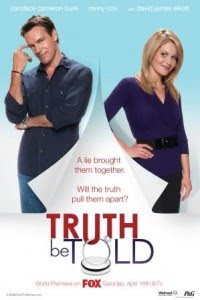 Walmart and P&G (Procter and Gamble) have teamed up to sponsor FOX’s Family Movie Night. The next movie is “Truth Be Told,” airing April 16th 8/7c.

The concept of truly family friendly fare--as is “Truth Be Told”--is a welcome one. (FOX’s and ABC’s so-called “Family Channels” certainly don’t always fill that bill!)

“Truth Be Told” has something for everyone: parents, kids and teens (featuring fleshed-out characters in all age groups). The pace of the movie is simple and slow so it’s easy to follow. It feels like a Disney-Hallmark-Christian film (although this is not a Christian film: there’s not mention or portrayal of God-church-faith). The values are rock-solid.

The theme is ALWAYS telling the truth, and although it’s the adults who mess up here, they are otherwise very ethical and good people (not dissolute morons), and the young people are not the perfect, smart-alecky wisdom figures, but real, flawed people as well.

“Truth Be Told” may be too pollyanna for some, but families can relax and enjoy this light entertainment without fear of having their sensibilities assaulted, and can see modeled romantic and family relationships that could-be-real-if-we-make-it-so.

About the Film:
What’s the secret to a successful marriage? According to Colorado’s leading marriage counselor, Annie Morgan (played by Candace Cameron Bure from "Full House" and "Make It Or Break It"), honesty is the key to successful long-term relationships. Ironically, Annie has never been married and doesn’t always follow her own advice...

Email ThisBlogThis!Share to TwitterShare to FacebookShare to Pinterest
Labels: truth be told