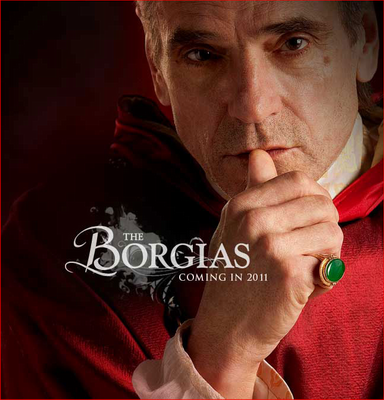 The Showtime TV series “The Borgias,” starring Jeremy Irons as Spain’s Rodrigo Borgia (the notorious Pope Alexander VI), is using the advertising tag-line: “The original crime family.” A lot of my Catholic friends are in a dither over this, but, um, they kind of were the original crime family, or one of them, at least.

Pope Alexander VI became pope in 1492 (an auspicious year!), and I think it no coincidence that he was a contemporary of Machiavelli, the “greed is good,” “might makes right,” “raw power,” “by any means necessary” political philosopher.

It remains to be seen if Jeremy Irons was well cast. (I think he was more suited to his role as gentle Fr. Gabriel in “The Mission.”) So far, he looks more apprehensive and afflicted with ennui (along with his saucer-eyed stare) than ruthless and driven. OR he is playing Alexander as a deceptively mild-mannered, sometimes sarcastic politico. Perhaps his character will yet develop some teeth.

Pope Alexander is portrayed as having some kind of twisted, lackadaisical, yet genuine faith in God--since belief in God was part of the prevailing worldview of the times--(often telling his priest-son “God will forgive us” before they sin). Yes, he has a family, as do most of the Cardinals around him. “We must APPEAR to be chaste” is the rule of the day.

After a slow start, “The Borgias” kicks into higher gear, deepening all the characters, it seems, but that of the Pope himself. The irony (or, perhaps sarcasm again) is Alexander’s constant references to his being a “reformer” of the Church. Gasp! Sr. Anne (the famous @nunblogger http://romans8v29.blogspot.com/ ) with whom I live, says: “Alexander VI is the pope we can all love to hate on.” The man was probably the worst pope ever and a just a total disgrace. One can see how desperately in need of true reform the Church was, but corruption was such a deeply embedded way of life—in all aspects of life—that we have to ask: were even the good-willed able to see their way clearly out of it at all?

Of course, these were also the times when the pope had significant temporal power, could crown and de-crown the monarchs of Catholic countries, headed a standing army, and owned significant land in Italy (“the papal states”). Probably one of the best things that ever happened to the papacy was the loss of all but the tiny Vatican-City State, so that the pope could truly focus on being a spiritual leader (with temporal impact) and Vicar of Christ.

Is “The Borgias” any good? There’s explicit nudity (is that redundant?), gorgeous costuming and settings, good acting (mixed Brit and American cast) and good-enough plots/dialogue, BUT the question is: Do you find corruption, subterfuge, deceit, murder, betrayal, bribery, greed, lust and lust for power interesting? I for one do not find this kind of intrigue intriguing. Never did. “The Sopranos,” “The Godfather” and other gangsta shows and cultures are grindingly predictable. Will they lie? Yes. Will they kill? Yes. Will they go that far? Yes. Why? Because they have no conscience, only a code of “ethics” that they made up (subject to change). The conclusion of the excellent book “The Sociopath Next Door,” by a psychologist and instructor at Harvard Medical School, is simply that the conscience-less are BORED out of their gourds, and so life has to become a game to save them from their utter and total lack of inhibition and empathy.

I simply do not find this train-to-nowhere-or-worse trajectory faintly interesting. Actually, I find IT kind of BORING, like Satan, who is not capable of spinning one original thought in his horned head, who can’t create anything new, but can only distort.

Final verdict: I did not find myself invested in this tiresome historical muck.

--This stuff really did happen, perhaps even worse than Showtime is showing it.

--APOLOGETICS—Bad popes prove that God is with the Church, otherwise they would have destroyed her long ago. “The gates of hell” are always more effective from the inside, and “the weeds grow with the wheat.”

“If the Church weren’t both divine AND human,
there’d be no place in it for us.”
–Blessed John Paul II the Great

--“The Borgias’ help us easily see—in this clandestine “you hide my sin, I’ll hide yours” culture—where the clergy sex abuse scandal came from and how it stubbornly persisted for centuries.

--It’s so jarring to see a pope who hypocritically goes through the motions, blessing crowds, paying lip service to God, etc., after the 20th century’s truly extraordinary and holy men on the chair of Peter!

--Lots of forced Church-y talk that sounds like the dialogue was ripped from the Catechism of the Catholic Church.

--Lots of twitchy sword-drawing at the least provocation. Touchy times.

--There’s a confusing scene where a woman confesses an abortion and during the course of her conversation with her confessor (the pope) it sounds like abortion is an “unforgiveable sin” (which it is not), even though he gives her absolution in the end.