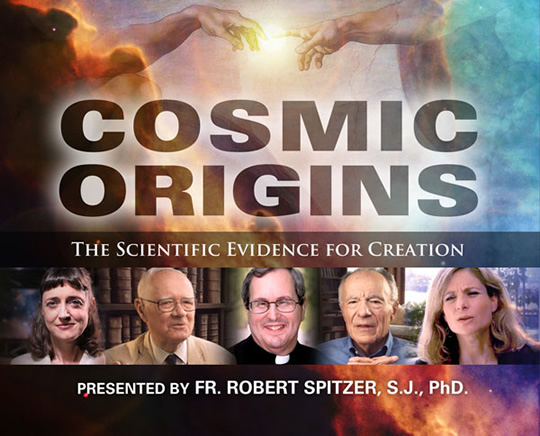 Got atheists? Atheist friends or family, that is? The “stellar” new DVD “Cosmic Origins” might help! Today’s top scientists (many award-winning) weigh in on the mysterious origins of our universe (and a possible beyond). Old and new cosmological theories are presented, leading up to the possibility of an “intelligent Designer.” But the film—being mostly a scientific exploration/explanation--doesn’t harp on “intelligent design,” which, as Cardinal George tells us, belongs more to the realm of philosophy rather than either science or religion. Physics is juxtaposed with a brief consideration of metaphysics. One does not feel bamboozled or railroaded by a sudden “attack” of “religious thought” at the end, where Jesuit priest Robert Spitzer (Magis Institute for Faith & Reason) introduces the concept of a harmonious relationship between science and belief.

The tone is one of informative scientific updating (for the layperson, but without talking down to us). Definitely not an “apologetics” tone. I try to keep up with the latest scientific findings (especially regarding cosmology), but I learned a lot from this film.

The format is diverse: footage of the universe, graphics, interviews, more than one live host, “man-in-the-street” opinions, etc. “Cosmic Origins” never lags. There is a conspicuous presence of young adults (especially the “man-in-the-street” insets, but although it personalizes all the information, I will eat my veil if these AREN’T scripted actors which smacks of inauthenticity. Too bad the filmmakers couldn’t have gotten REAL reactions). Atheism is the fastest growing “religion” among young adults and the “New Atheism” movement is eagerly proselytizing these young minds and hearts. “Unaffiliated” is becoming the preferred category for young adults under “Religion” when filling out forms.

Carl Sagan wanted the average person to be informed about science and was frustrated by what he deemed Americans’ “celebration of ignorance!” Famous “new atheist,” Richard Dawkins, held the position of Oxford’s “Professor of Public Understanding of Science” from 1995 to 2008, which is a lovely-sounding title that I’m all for. However, scientists also need to understand that not everyone is interested in understanding how things work or even the scientific explanation of the origins of the universe. And it can be argued that the average person does not even NEED to know these things to flourish. It could be argued that the average person WOULD benefit much more from knowing what, say, another type of scientist, that is, a medical doctor, knows! Also, we all have our own specialties. Does Dawkins know what a mechanic knows? Can he fix his own car? Sometimes, scientists have a kind of hubris, demanding that everyone bow down to their discipline/field as THE MOST IMPORTANT THING ON EARTH.

The universal longing for love, meaning, fulfillment, self-understanding, connection with others, etc., trumps the desire for and acquisition of practical/functional knowledge every time. But this is still not an excuse to be a willful ignoramus. At least be curious about God’s astounding Creation, OK, believers? This might be the first bridge towards reaching atheistic scientists and their followers who ONLY have science (many eschew philosophy along with theology).

One scientist in the film sums it all up by stating that science MUST be open to ALL possibilities, so why not the possibility of a Designer? OR , as Scott Hahn says, at a certain point, a Creator/Designer IS the most logical answer, but because the atheistic-scientific bias and agenda is pre-set, we get the “anything but God” answers, theories, etc.

Full disclosure: This film is a production of Barbara Nicolosi’s (my good friend) production company, “Origins Entertainment.” But do you think she even told me about this project?

FILMS:
Two other (flawed) films that I highly recommend for those interested in the  atheism/evolutionism/
creationism debates:
--“Expelled” documentary (Ben Stein’s sheer propaganda for the “creationist” position) My review: http://hellburns.blogspot.com/2008/04/movies-expelled-no-intelligence-allowed_07.html#.UD6OvsFlQWM
--“Religulous” documentary (Bill Maher’s sheer propaganda to support his position which is that he really, really, really hopes there’s no God) My review:  http://hellburns.blogspot.com/2008/10/movies-religulous.html#.UD6QYsFlQWM

BOOKS:
--“There Is a God: How the World’s Most Notorious Atheist Changed His Mind” Anthony Flew
--“The Language of God: A Scientist Presents Evidence for Belief” Francis S. Collins
--“Atheist to Catholic: How Scientists and Philosophers Led Me to the Catholic Church” by Kevin Vost
--“Answering the New Atheism” by Scott Hahn and Benjamin Wiker (written by Hahn and Wiker for 4 Franciscan Univ. Steubenville students led astray by Dawkins’ “The God Delusion.” It brought ‘em back.)
--“Mere Christianity” by C.S. Lewis (a very small book that has been giving atheists pause for decades!)
--“Atheist Delusions” by David Hart (Orthodox) goes deeply into the atheist mindset and assumptions
--“Can a Smart Person Believe in God?” by Michael Guillen, award-winning Harvard physics prof
--“Faith of the Fatherless—the Psychology of Atheism” by Dr. Paul Vitz
--“The Drama of Atheist Humanism” by Henri de Lubac. What has been atheism’s historical track record? (atheist regimes)
--“Philosophers Who Believe—the Spiritual Journeys of 11 Leading Thinkers”
--"God and Evolution--Science Meets Faith" by Dr. Gerard Verschuuren 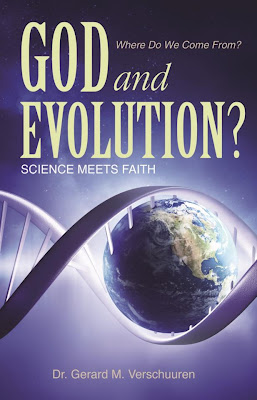 OTHER STUFF:
--www.STOQinternational.org =Vatican’s dialogue among science/faith/philosophy (The Pontifical Academy of Sciences, to which Galileo belonged, also has atheists in its ranks like Stephen Hawking.)

--“Light becomes matter”? Whaaa--? If I heard correctly, the Big Bang was, like, this, like, explosion of light photons which, like, BECAME matter? Whaaaa---? I need professional scientific help. My brain is melting.