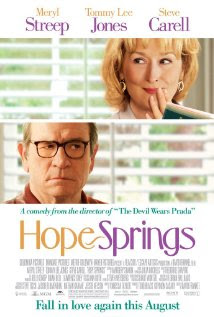 “Hope Springs” (not to be confused with “Hope Floats”) is yet another PG-13 film that should have been rated R. It is filled with mature, graphic sex talk and visuals--although there is no nudity and everything happens clothed (hard to explain). It’s almost a sex farce, but actually more of a tragicomedy. Definitely for adults.

Kay (the indescribably, superlatively fabulous Meryl Streep) and Arnold (Tommy Lee Jones in his best role ever?) are empty-nesters in a relationship with barely a pulse. Arnold appears to be satisfied with things as they are, but Kay is determined that things must change. She signs them up for an intensive couples counseling week with Dr. Feld (a serious Steve Carell). And it’s hard. Years of built-up “scar tissue” needs to be acknowledged, articulated, removed. It’s one step forward and two steps backward.

There’s an “any kind of sex” within marriage* goes ethos (even though this is a pretty conservative couple). Aside from the approval and occasional follow-through of fast and loose sexual mores WITHIN marriage, a deep connection is otherwise maintained between the couples’ physical intimacy and emotional intimacy, without which the marriage is just a “marriage license” and “sharing of bills to be paid.” Both intimacies must come alive again. In a Kay and Arnold way. And in a Theology of the Body way, men and women have different needs, and even as mousy Kay “initiates” the initial action, it’s Arnold, the bridegroom, who MUST sweep her off her feet again or risk losing her forever.

The genius of this film is that there are NO BIG EVENTS. NO BIG REVEALS. NO DEEP, DARK SECRETS. There are no harsh words, no screaming, no throwing things, no ultimatums. The increments of dramatic movement are small and organic. Simple, linear A-story progression. How DO you get the magic back? And what if one partner is less willing than the other to even try?

As wonderful as Meryl Streep is, this is Tommy Lee Jones’ movie all the way. His delivery and timing is beyond perfect. Who knew he had a role like this in him? I wouldn’t be surprised at an Oscar nod.
This film may help those in troubled marriages to realize their marriage is definitely worth working on with everything they’ve got. And the road will be rocky for both sides.

This film screams: Nothing, nothing is more important than a marriage. Your marriage. Marriage.
___________
*"Any kind of sex" as long as it's within marriage and both partners are willing, is not OK. The integrity of the sexual act (or, in TOB: the marital embrace) must always be respected. For nitty-gritty Q & A: "Good News About Sex and Marriage" book by Christopher West.

--Unusual to see such a dutiful, almost 1950’s, kept-down type of wife being portrayed. Sometimes that felt a bit unrealistic, even though these women certainly do still exist today. But this shrinking violet turns out to be a steel magnolia in her tenacity: not in order to achieve some kind of “self-realization,” but in order that her marriage be a “real” marriage again. She reminds me of an older woman and her husband I had supper with who now teach marriage prep. She told her husband at a certain point in their marriage: “We can have more.” And they set about becoming and getting that “more.”

--SCREENWRITING STRUCTURE’S “KARMIC QUESTION” IN ACT ONE: “CAN you change your marriage?” Kay’s friend says, “no.”

--It was great to follow just one couple’s journey without being able to look away (compared to the slapstick, silly and uninstructive “Couples’ Retreat”).

--Screenwriter is a woman: Vanessa Taylor!

--Meryl Streep: how women can grow old beautifully and gracefully.

--The renewal of vows! We show our love in the little things.

--“Sometimes when a connection is lost we forget how to want one another.” –Dr. Feld

-- "Why Men Have Trouble with Intimacy" http://bit.ly/PqnJVg  (great article, and what "Hope Springs" is really all about!)

--People sometimes ask me: Do you go to movies in your habit? Yes, because I believe "the Church" has to be where the people are, and the Church desperately needs to be more VISIBLE especially in the ARTS. People rarely ask me what I'm doing or what I thought of a film (I sometimes ask others on the way out). They can see me scribbling during the entire film, so it's kind of obvious I'm "studying" the film in some way. I think nuns should be EVERYWHERE, and I think they used to be--back in the heyday of teaching nuns when Sisters had to know a lot about a lot of things in order to teach about them. (Same for medical Sisters.)

One of our Sisters is studying art and interior design at the Illinois Institute of Art here in Chicago. She is in with all ages of students who accept her as one of their peers. Her professors are the ones who are really fascinated. She explains the mission of our congregation (to evangelize with and through media) and they're even more fascinated. This Sister has had many conversations about God and religion and was able to bring a long-time fallen away architect back to her Catholic Faith. :]

--Was I even a little embarrassed sitting there in my habit (toward the front of the theater) at this movie? Yes. Once I realized that a good portion of the show would be about sex (all in the context of marriage counseling and trying to save a marriage). But 1) I didn't know ahead of time 2) movie reviewing is my job/ministry 3) it was "PG-13" 4) I still believe "the Church" needs to be present 5) it was handled well for the most part 6) sex (being talked about or somewhat portrayed in film) is not a dirty or bad thing (although I believe in very definite limits about what should be portrayed ever, at all) and the realistic balance of body/soul in a marriage relationship was well-captured 7) there was absolutely nothing titillating about the sex talk/visuals. This was an older, awkward couple, and, again, the film is a bit of a sex farce, but not a crude one.

--I believe it’s important to ALWAYS lay out and reiterate MORALITY, MORAL NORMS (e.g., when they are missing, misrepresented, transgressed, etc., in films), especially today because people don’t even know what’s moral/immoral any more. But at the same time, I don’t want to condemn the truly HUMAN. Even if it’s not the BEST of the human. Even if it’s the STRIVING and FAILING human. Grace builds on nature. Yes, let’s call a sin a sin, but let’s not stop seeing the HUMAN, the PERSON beneath the sin. And what CAN be. And what CAN be transformed. The HUMAN that can be transformed.

I will not condemn the truly human. God created human beings good. Even angelic and human sin has not changed that. Luther and Calvin were wrong when they believed that the Fall made us fundamentally bad now. This is NOT the Catholic belief. We are good, inclined to the bad, not bad inclined to the good. The Fall darkened our intellect (MIND), weakened our will  (WILL), and disordered our passions/desires (HEART), but did not make us “utterly depraved.” Everyone is born with original sin which Baptism removes (but we still feel the effects of original sin). Humans are capable of incredible evil, and mixed with the demonic (fallen angelic), even greater evil. But the human can always be redeemed (not so, the demonic). God became incarnate into “human stuff” and it is the “human stuff” that He redeems, body and soul, as it is.

When people are truly clueless, the culpability for sin is mitigated. True, people have consciences, but tell me, who is forming young and not so young people’s consciences today? There is a huge void here (and has been for decades in America), and people’s consciences are unformed, malformed and deformed. People think conscience means: “I do what I think best.” (But conscience is conforming ourselves objectively to God’s Revelation and then being able, subjectively, to hear God’s voice within and apply His Revelation to our lives and particular circumstances.) When we watch films made by non-believers, featuring non-believing actors playing non-believing characters, I believe we must rejoice when they get it right! How can they possibly get it right? God is at work in them whether they know it or not. The mind was MADE for the TRUTH, the will was MADE for the good WAY, the heart was MADE for the LIFE of love. We shouldn’t be TOO surprised when people get it right. (BTW, this is Blessed Fr. James Alberione’s “Jesus, the Divine Master: the Way, the Truth and the Life” spiritual method. The whole Christ to the whole person. The whole person [MIND, WILL, HEART] to the whole Christ.)

“Bad Catholic” (Franciscan University of Steubenville’s wunderkind student blogger, Marc Barnes) posted this yesterday. It is probably the most accurate, in-depth description of Millennial (the cohort) depravity and debauchery by a Millennial (WARNING: it’s very “rough” language). If you want to read it, listen to the SPIRITUAL PAIN. What I would love to tell the band (Titus Andronicus) is this:

“OK. I get that you’ve tried everything and you’re jaded and disgusted. I hate to disillusion you, but you do not have a corner on sinning: we’re all sinners. I’m sorry if you thought you were special. Now, what are you going to do about it? Cry in your soup? Is there any hope for you? To Jesus through Mary. They are not afraid of human muck. They can turn you around in the twinkling of an eye.