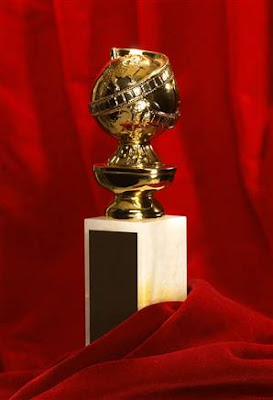 THE GOLDEN GLOBES ARE GREAT BECAUSE the stars are very candid, non-slick, and it doesn't feel like the Hollywood "machine." Also, because the Golden Globes are awards from Hollywood's foreign press, it's truly international, and 1/2 billion people are watching with you across the world. (First year for China!)
Best Actress in a movie: Sally Hawkins for "Happy-Go-Lucky" (won over Meryl Streep for "Mama Mia," among others). She was great (mostly improv, ad-libbing), but the movie was flat. Jon Hamm did NOT win for best male actor in a TV series: "Mad Man." I'm a mad woman. "Wall-E" won for best animated film. How could it not??? Tom Wilkerson won for playing Ben Franklin in "John Adams." Yipppeee! He was also HYSTERICAL. "John Addams" won best something-or-other. Justice has been served. Laura Linney won for playing Abigail Addams in "John Addams." Screenwriter from "Slumdog Millionnaire" won. The movie just wasn't THAT great, but the kid actors were FABULOUS.
Paul Giamatti won for playing John Addams. "Slumdog Millionaire" won for best soundtrack--very modern choice! It's Mumbai meets Harlem! It is quite good. "30 Rock" won big (never seen it). Steven Spielberg was so sweet and grateful and a little bit boring (for a lifetime achievement award) and talked about that in the future of movie-making, we can't forget that the audience is an audience of individuals. Danny Boyle won best director for "Slumdog Millionnaire." I think David Fincher should've gotten it for "Benjamin Button," BUT I love Danny Boyle sooooo much for "Millions," that I'm glad he got it. Kate Winslet won for "Revolutionary Road" over Meryl Streep for "Doubt." Umm...I don't know about that.... It's so funny when actors accept rewards. Are they acting or what?? Ha ha ha. Sally Hawkins and Kate Winslet seemed rather...melodramatic. OK, "Mad Men" finally won something! Hip Hip! Mickey Rourke won best actor ("The Wrestler").
Full coverage: http://www.variety.com/index.asp?layout=awardcentral&jump=news&id=globes
Posted by Sr. Helena Burns, fsp at 7:47 PM