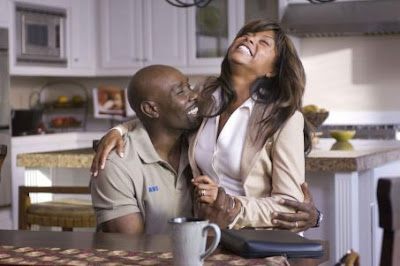 The movie title “Not Easily Broken” refers to the Scripture passage: “A cord of three strands is not easily broken” (Eccl. 4:12 NIV), quoted to a young couple on their wedding day. That cord is husband, wife and God. That couple is calm-demeanored David (Morris Chestnut, “Boyz in the Hood”) and fiery Clarice (Taraji P. Henson, “Benjamin Button”). Also quoted to them by their pastor is the fact that it’s going to be very hard. But of course, young love never listens.
David’s major league baseball dreams are dashed when he’s injured, but Clarice’s dreams are realized as she becomes a high-powered real estate agent and main support of the couple. However, her ambitiousness, not wanting any children yet, and high lifestyle are tearing the marriage apart. At first, the story allows Clarice (and her mother who moved in) to attack David’s faults unrelentingly. This constant barrage of criticism is reminiscent of another Scripture: “When words are many, sin is not absent” (Prov. 10:19 NIV), and we’d like to just clamp our hands over Clarice and her mother’s mouths. The audience realizes Clarice is losing David before she does. Her one pet peeve about David that we might agree with is the amount of time he spends with his buddies and the kids he coaches. (We’ll catch up to Clarice’s faults at the end.) The everyday dialogue, the fights, the nitty-grittys of relationships all ring true without being dull or melodramatic.
Unfaithfulness, affairs and divorce are commonplace in Clarice and David’s world, but neither of them really want to go there themselves. Throughout the movie is David’s contemplative commentary about how he sees life, and the wisdom he is trying to acquire. This seems to be something of a first for an African-American man in a film, and it’s wonderful. Yes, David is tough, but his inner life reveals that he wants what everyone else wants. The proverbial life of crime tempting every Black man in America is something David works against in his coaching of kids. It also makes him feel like the father he’s not.
When things are at their worst, David and Clarice turn to their pastor for marriage counseling, to no avail. They split. At this point comes a very fascinating reveal. This is not really a spoiler alert, because you will want to see the movie and follow Clarice and her mother’s conversation to get the rich fullness of it all. Here is a case of a mother’s bitter disappointment with marriage totally poisoning her daughter’s marriage. It makes us question—how much do we allow parents (or other close relatives, friends) to OVERSHAPE our lives? MAKE our decisions for us? OVERINFLUENCE us? Clarice is grateful for all her mother gave her, teaching her to be strong, but, she says, her mother never taught her how to love and care and forgive. As Clarice later admits to David: “I was never taught how to be a wife who hung on her husband’s words, or trusted him to take care of her.” She knows she’s really not that “type” anyway (and David loves her for her spunk), so she tells him she wants to be his “partner.”
Expressed in “Not Easily Broken” is a certain backlash against a feminism that urges women to be radically independent instead of interdependent, and a feeling of victimization on the part of men. A voice-over soliloquy from David about how a world where men used to be seen as workers, cultivators and protectors has changed, is very poignant. He says women started being their own heroes because a) men stopped being heroes b) women wanted to be their own heroes OR c) all the pain women endured at the hands of men. The pendulum seems to have swung.
There’s lots of great marriage advice in “Not Easily Broken,” but even more effectively, we see illustrated—with great realism—the experiences most couples go through, the traps and dead-ends many couples fall into. The pastor bided his time to ask Clarice this pointed question: “Did you really include God as that third strand in your marriage?”
MORE RANDOM THOUGHTS:
--“Not Easily Broken” is based on T. D. Jakes’ book, and he has a cameo as one of Clarice’s clients (not Billy Graham style, as Billy Graham).
--Good actors can make ANY lines good (maybe not the story, but lines, yes).
--David and Clarice both have hilarious, sidekick best friends.
--Did Taraji like this part? I can’t tell. Somehow she looks like she feels “above” it. (She stole every scene she was in in “Benjamin Button.”)
--In some sectors today, men feel/are victimized by the “strong” women in their lives. It’s odd, because male chauvinism and domestic abuse continue in other sectors. History is never a clean break.
--Loved the L.A. traffic, city and neighborhoods photography. Made me homesick.
--Brad Pitt wanted kids badly. I saw him on a talk show when he was between Jenn and Angie, and he was very candid and he was almost crying talking about the kids he wanted.
--Great Theology of the Body line: “If you want to know what something is for, you can’t ask the thing. Ask the Manufacturer.”
--We can’t go back to some 50’s ideal of male/female relationships. We must keep purifying it, to what God intended, which rocks. With a little help from Theology of the Body.
Posted by Sr. Helena Burns, fsp at 8:46 PM

Email ThisBlogThis!Share to TwitterShare to FacebookShare to Pinterest
Labels: not easily broken