WHY MARY IS CLOSE TO HUMANITY 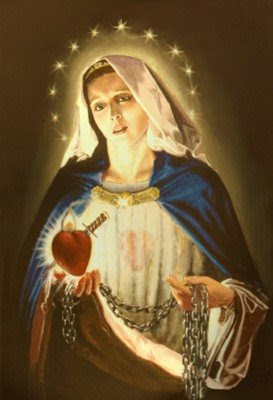 Sin Divides, But Purity Brings Near, He Says

LOURDES, France, SEPT. 14, 2008 (Zenit.org).- The Virgin Mary's special protection from sin does not make her far from the rest of humanity, but rather draws her closer to us, Benedict XVI says.

The Pope affirmed this today from Lourdes, where he is marking the 150th anniversary of the apparitions of Our Lady to Bernadette Soubirous. In his address before praying the traditional midday Angelus, the Holy Father said the privilege of the Immaculate Conception, "which sets [Mary] apart from our common condition, does not distance her from us, but on the contrary, it brings her closer."

"And your own soul a sword shall pierce that the thoughts of many hearts may be laid bare." --Luke 2:35

He explained: "While sin divides, separating us from one another, Mary's purity makes her infinitely close to our hearts, attentive to each of us and desirous of our true good. You see it here in Lourdes, as in all Marian shrines; immense crowds come thronging to Mary's feet to entrust to her their most intimate thoughts, their most heartfelt wishes.

"That which many, either because of embarrassment or modesty, do not confide to their nearest and dearest, they confide to her who is all pure, to her Immaculate Heart: with simplicity, without frills, in truth. Before Mary, by virtue of her very purity, man does not hesitate to reveal his weakness, to express his questions and his doubts, to formulate his most secret hopes and desires."

The Pontiff said that Mary thus shows man the way to come to God. "She teaches us to approach him in truth and simplicity," he said. "Thanks to her, we discover that the Christian faith is not a burden: It is like a wing which enables us to fly higher, so as to take refuge in God's embrace."

Benedict XVI went on to note that the grace of the Immaculate Conception is not given to Mary as a merely "personal grace," but is rather "a grace for all, a grace given to the entire people of God."

"In Mary," he continued, "the Church can already contemplate what she is called to become. Every believer can contemplate, here and now, the perfect fulfillment of his or her own vocation. May each of you always remain full of thanksgiving for what the Lord has chosen to reveal of his plan of salvation through the mystery of Mary: a mystery in which we are involved most intimately since, from the height of the cross which we celebrate and exalt today, it is revealed to us through the words of Jesus himself that his Mother is our Mother.

"Inasmuch as we are sons and daughters of Mary, we can profit from all the graces given to her; the incomparable dignity that came to her through her Immaculate Conception shines brightly over us, her children."
Posted by Sr. Helena Burns, fsp at 2:00 PM