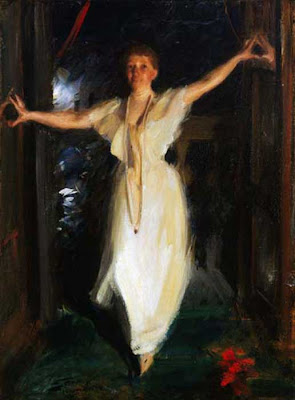 The House That Mrs. Jack Built
I was born and raised in Boston, but never visited the world-famous Isabella Stewart Gardner Museum at the Fenway until a few days ago. It exceeded all my expectations, or rather SHE did.

As a girl, I heard of this magical place and saw photos of the Old World Venetian-style indoor courtyard flooded with sunlight from its glass roof four stories above. But what really thrilled me was this print I saw somewhere of Isabella Stewart Gardner ("Mrs. Jack") bursting through a doorway. I mistakenly thought this painting was by John Singer Sargent (whose artwork was ardently collected by ISG), but it's actually by Andrew Zorn. This radiant portrait captured ISG's spirit, and from that one glimpse, I recognized a kindred spirit, and got what ISG and her museum were all about: a celebration of life and beauty for everyone, guided by ISG's sure, particular, womanly, determined, strong, playful, rich, religious and culturally open aesthetic. (As Mother said, the museum has a "woman's touch," but it doesn't feel overly feminine or frou frou.)
"C'est mon plaisir"
Mother and I parked on the street and entered the boxy but unassuming building at 2 Palace Way under Isabella's welcoming motto: "C'est mon plaisir." (Isabella is alive even outside the building.) You are her guest. Inside is a perfect mix of color, light, statuary, paintings, furniture, sculpture, tapestries, sketches, ceramics, rare books and papers, plants and flowers, artifacts ancient and modern (up to 1903 when the museum opened and ISG completed her 2,500 piece collection). Along with this repository, ISG supported and promoted many young artists and almost every art form including dance and music. The only art she seemed to stay away from was abstract art. (?!) The current artist-in-residence at the ISGM is displaying video.
One word to describe ISG's sensibility? Victorian. The very best of the gilded age (to which I am romantically partial). The courtyard, filled with Roman statues and fountains is looked down on by eight balconies and four Venetian facades. The greenery gives off a palpable hothouse feel. The art galleries are on the first three floors, and the fourth floor where Mrs. Jack used to live has been turned into offices. (Mother was rightly upset that they hadn't preserved--and we didn't get to see--how she lived, that her private quarters weren't PART of the museum.) 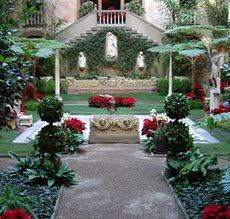 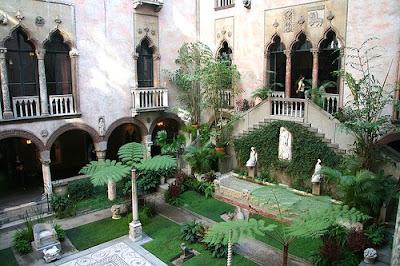 Swamplands
On the first floor, there are nooks and crannies, cloister arches, an outdoor walled garden, a cafe and a small gift/book shop. In 1903, ISG threw open her own house to the public forever. When it opened, she had a larger collection than the Boston Museum of Fine Arts which had moved in next door. (Even in real estate, Isabella was a trendsetter, draining the Fens and making it THE place to be.) Since 1903, the ISGM has remained basically unchanged (as per her will). ISG designed and meticulously oversaw the architecture and entire building process herself. "Genius," doesn't even begin to cut it. She was proud to be of the royal house of the "Stuarts," and in a different time and place, ISG would have been a wondrous and munificent queen.
Mother and I meandered around the first floor; ate a "boutique" but satisfying lunch in the tiny cafe; wanted everything in the exquisite, tiny gift/book shop (but settled for two books on our newfound heroine); used the ladies room with its whimsical wall-maxims:
"Le secret de deux:
Le secret de Dieu.
Le secret de trois,
le secret de tous"
and then proceeded to the upper galleries.
A Well-Appointed Room
One thing you must know is that ISG arranged every single gallery herself to the last detail and stipulated in her will that nothing is ever to be moved or sold or added to (sounds like St. John in the New Testament!). Control freak? No. Artist who knew exactly what she was doing. (Her "ebullient" personality was the exact opposite of control freak.) Her whole house (which truly feels more like a house than a museum) is what we would call today an "installation." It is her work of art. Like the new Getty Museum in L.A., the atmosphere itself speaks. Each chamber is not simply four blank walls on which to hang art, it's an actual room with tables and chairs and fireplaces and such, around which all the art is placed as decor. But don't even think of sitting down, because the chairs are also art. Everything in the room is part of the collection. 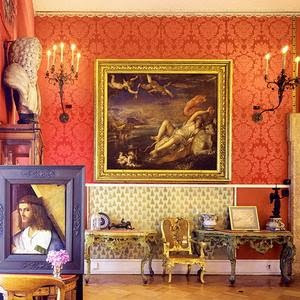