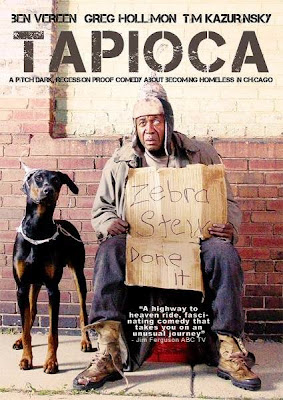 (This review may only be shared in its entirety.)

I was asked to review this movie for "The Catholic New World," Chicago's Archdiocesan Newspaper (being that I am its storied movie reviewer). However, the language and jokes are just so lewd and coarse, I could never do that. Note to guys everywhere: Women hate this kind of humor. If we say we like it, we're just pretending, like we say we like sports. And we think you should hate it, too.

There are very few women in the film. Only two young women who get dissed (and avenged), two bimbos, and Queen Clothilde. Yes, the dead French saint, but it works. It's kind of unfortunate that this isn't family viewing (an option was obviously made for "adult fare" to preserve the authenticity of the worlds of stand-up comedians, the street, addiction and guy-dom.) You know when a joke is off-color, but the general concept of the joke and its execution are really, really funny? That's "Tapioca."

That being said, this is actually a very interesting, though at times rather staged, movie. Call it "gutter theology"—literally. "Pipes" (Chicago stand-up comedian Mike Houlihan) is a down-on-his-luck Chicago used car salesman and TV pitchman. He descends into homelessness because of booze and the fact that he's basically a jerk. Or "slimebag" as St. Peter calls him. Yes! Another dead saint that totally works. Not corny. I really liked this grizzled St. Peter with his fisherman's slicker, sitting in a southside Irish pub. Oh yes, and Pipes is a racist. But the tables are turned on him by "Nuts" (Ben Vereen!)—a mysterious, crazy, homeless guy with one of the cutest, shiniest-coated homeless dogs ever. The tables are COMPLETELY turned on Pipes, and he is forced to eat his words, almost to his utter degradation. It reminded me of the Israelites wandering in the desert—who complained to God that they would die there. And so they did. The Houlihan/Vereen thing also reminded me of the famous episode of "All in the Family" with Archie Bunker and Sammy Davis, Jr. (one of the greatest moments in TV as far as I'm concerned).

Out of all the things I like about "Tapioca," my favorite thing is that it's LOCAL, GRASSROOTS FILMMAKING. If I didn't know some guys like Pipes here in Chicago, I may not even totally get "Tapioca." It's that local. I'm from Boston, have lived in various cities around the country, and only Chicagoans say "goofy." A lot. Hollywood can do a "version" of Chicago, but Chicago can do Chicago best. "Streetwise." "Fermilab." "Little Company of Mary." Unintelligible to the rest of the country. Yay.

What really DIDN'T work in this movie was—alas—the title! And it's almost as though the filmmakers knew it, because they keep bludgeoning us over the head with the word and the convoluted concept. This movie should have been called, pardon MY French now: "Saving A**." The tagline should have been the wonderful advice (among a lot of other wonderful advice in the film): "Think about saving someone else's a** for a change." THAT'S what this movie is all about!!! (It would also have given a clue to the rough nature of the film.) Someone called in to Relevant Radio recently (our Midwestern Catholic radio station) and asked, "How can I make Christmas holy?" After seeing "Tapioca," I thought to myself, "simple": "Think about saving…."

It's hard to classify this film—and that's good, too! Truly experimental, ground-breaking stuff. There's lots of improv woven in (lots of stellar sob stories from panhandlers—just like we've all heard—that deserve remuneration just because they're so entertaining), cartoons, one-liners, soliloquies, a sudden busting out of rhymes (hip-hop), a kind of jazzy vaudevillian soundtrack (for Pipes is a sort of tragic clown), a brilliant scene where Pipes meets an old Black street preacher—this actor is incredible. I laughed so hard and rewatched a few times to catch each flawless second/detail.

There are many poignant moments, like whenever the homeless Danny shows up: an abused child in an adult's infirm body. There is a realism, a verite to most of the film—which, of course, contrasts with the self-conscious "staged" parts, and the tongue-in-cheek parts, and all the other parts. The dialogue is more real than the most realistic screen dialogue--because it doesn't go for verisimilitude—it feels more like a partially-scripted "reality show" or like "The Office." It's like a prolonged, enhanced sketch comedy. It doesn't feel "all over the place," but rather like a variety-pack with a big dose of crazy.

Pipes' humor is that Irish, melancholic, crying-in-my-soup brand of humor. It reminded me of the classic 1960's documentary, "Salesman," about a Boston-Irish Bible salesman whose sales are going down because of his increasing cynicism.

There's a bit of Dickens' "Christmas Carol" to "Tapioca." This dark comedy is also a story of redemption. Men discovering their own and others' humanity. Wanting to discover it. The "brotherhood of man." Who won't go to heaven? "Those who forget what it means to be a human being," warns the gatekeeper. There is a meeting of the minds, a rough coming together of Black Mississippi-bred Christian faith and White Irish Catholicism. It reminded me also of the movie "Crash," where people REALLY say what they're REALLY thinking without holding back. And it's for the better. Gets things in the open air where they can be dealt with.

Religion is not icing in "Tapioca." It's the entrée. All our good deeds are written in the Big Book. God is real. The divine is poking through all over the place.

Email ThisBlogThis!Share to TwitterShare to FacebookShare to Pinterest
Labels: tapioca