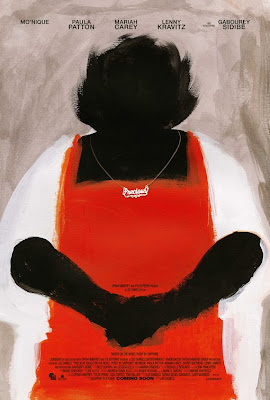 "Precious" is a hard movie to watch. "Precious" is the ironic name of a young woman (played with perfectly stifled emotion by newcomer Gabourey Sidibe ) who is anything but precious to her brutal parents (Mary, her devil incarnate mother, is played by Mo'Nique). Based on the novel "Push" by Sapphire, and set in Harlem in 1987, "Precious" is an unblinking look at abuse of every kind heaped upon an adolescent who is basically treated as a slave in her own home. There is no searing tension or terror as we observe the intricacies of the abuse playing out--simply a sick, sinking feeling in the pit of our stomachs. It's the "banality of evil" that Hannah Arendt wrote of.

I knew this film would depress me, and it did, even with its somewhat game-changing ending. But "Precious" is, overall, a life-affirming film—not in a facile Hollywood fashion, but in a "wisdom of the streets," "life goes on" sort of way. I did buy that Precious—for the most part--did not retaliate or act out in kind (she turns the abounding hatred she's surrounded with into self-hatred) because some of the kindest people I know are those who've been abused. Abortion is not a viable option in "Precious." Somehow, Precious (in addition to her own kind and stalwart heart) finds enough people to help her make it through. Precious lives, discovers more about, accepts and then changes up her life story with the same kind of simplicity she has reduced her almost monosyllabic verbal communication to. (Her more elaborative voiceover is interwoven in all the right places.)

Some African-Americans are reacting to the film by saying it's stereotyping the experience of Black poverty, others are saying it's about time everyone saw what's "really going on." I couldn't help thinking of the pop culture truism that you've really arrived when your "type" doesn't have to always be portrayed as "saintly" (the noble victim, the hero, the moral character, etc.) any more. It also made me think that "Precious" didn't necessarily have to be an African-American story. Precious could be anyone in the heart of my neighborhood or your neighborhood, who looks like everyone else (although Precious' abuse made her obese) and goes about her day and seems to function like everyone else. Trapped in her own private little horror story.

Subtle social statements are made about the welfare system, illiterate students being advanced year after year, the ideal and emulation of whiteness by non-Whites, superficial social work, even fast food compromising health in lower-income neighborhoods. The way out? Education. There's a familiar role in "Precious" of the self-sacrificing , getting-personally-involved teacher. But thankfully, this part doesn't overshadow Precious herself: her inner reserves, her strength, her innate knowledge down deep somewhere that she was good and her parents bad, her desire and determination to do so much better for her own two children.

From a Media Literacy Education point of view, the educational stress (as it would have been in 1987) is all about reading and writing. Precious' teacher (in the alternative school) goes back to basics (the alphabet) and gets Precious and her cozy all-female class reading, writing, expressing themselves, connecting school and life, and actually enjoying it.

"Precious" ends in a fitting though unusual place with a "speech," not by Precious, but by her mother. (If Mo'Nique doesn't get an Oscar, it will be as criminal as Mary's self-indictment.)

Precious is a story about breaking cycles—the cycle of abuse and unchecked hatred of a most devastating kind. About the almost limitless ability of human beings to alter any situation, no matter how ingrained or bleak. It starts with love. Love of self. In Precious' case, being able to say one good thing about herself. Precious possesses a kind of inner quietude that matches her exterior: a scrunched-up, silent face of continual consternation. And I think it is from within this solitude that she begins to dig out of the ravages of her non-family's extreme selfishness. The script of our lives is only partially written by others. One does wonder, however, about her future need for ongoing psychological healing. ("Precious" is scrupulously free of any "psychologizing.")

The cinematography is not raw, not slick—it's all over the place and somewhere in between. But it grows on you until you feel it unequivocally belongs with this movie.

Although some have not found much hope in the film (no widespread systemic social change is forthcoming), the transformation really happens at the level of caring individuals, keeping Precious and her ilk from falling through the cracks totally. Precious herself had her own escape valves (picturing herself as an adored pop star or somebody's girlfriend, imagining non-existent happy family memories) when things were worst. The story is left unfinished, but somehow we know that Precious is going to make it because she now knows who/what she is: precious.

OTHER STUFF:
COMMENT FROM ANDY KIRCHOFF: The end of your review makes me want to see this movie BADLYI'm guessing this film isn't overtly religious, but I can think of only one way someone could know that they were"precious" despite indications to the contrary in almost every instance of day-to-day life. If a person knows that they have intrinsic value, in spite of everything that happens to them, in spite of everything they've ever done, they will "make it," to say the least. Of course, as Catholics, we know exactly why we have this "intrinsic value"; it's because we are created by God in His image, to love and to serve Him in this life and the next. ... See MoreIf this movie communicates a theme even remotely close to what I've described above (even if not explicitly), I am sure I will like it, if not love it. Heck, it'd be a huge step forward for Hollywood, which seems so dedicated to banality, if not raw obscenity, if a dedicated director could produce something to this effect.

MY REPLY:
It's a very honest, almost plain film. But not raw. It's not even gritty. It just tells this terribly sad, quiet story. The only overt religion in it is a Gospel choir singing at a certain crucial point. I am cool with the film showing someone being able to find their dignity even without direct knowledge of God because we are the image of God and can intuit our dignity. True humanists do this.What I think I'm most fascinated by is the fact that there is exactly zero "psychology" in the film--just hardcore lines of right and wrong with no excuses. Reminds me of James Baldwin's writing. We don't find out about Precious' parents' tragic childhoods or anything. No excuses. It reminds me of CBT (cognitive behavioral therapy). CBT doesn't delve into the subconscious or motivations--it's about the here and now--what people are actually DOING or NOT DOING. CBT is not interested in what you say you believe. Only what you actually DO or DON'T DO. Um, didn't Jesus say something like that? "Not those who say: 'Lord, Lord,' but those who do the will of my heavenly Father"???Yes, run see this film! (But it's still not better than "Gran Torino") :]