Opens Friday, May 14, in Chicago at www.MusicBoxTheatre.com 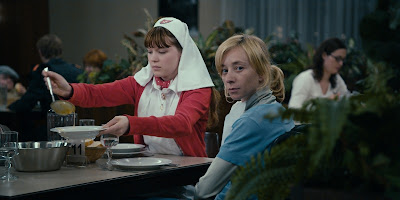 The new European film, "Lourdes," winner of Best Film at the 2009 Vienna Film Festival, is an interesting take on suffering, faith, God and miracles. I usually find dramas about doubt-wallowing and the nature of the miraculous very tedious (but not as tedious as treatments of Church bureaucracy—the ultimate snooze-inducer), but this light-hearted, almost feel-good vignette manages to avoid the tedium.

A young woman with MS (in a wheelchair and unable to use her limbs) goes on frequent trips and pilgrimages in order to "get out." She rooms at Lourdes with a completely silent, nameless, pious older woman (Mary??) who is unobtrusively solicitous for her (especially when the youthful Lourdes "helpers" are more interested in romance than their duties towards the disabled). Everyone at Lourdes is yearning for a miracle. Questions of worthiness come up. People are angry when others are cured and they aren't.

There's a wonderful, humble priest on the trip who is expected to speak for God, which he does, well. He doesn't spout off easy, dutiful "will of God" platitudes, but rather deep, contemplative, relational, irrefutable answers (which people probably knew already, but just needed to hear). I remember when the great tennis star, Arthur Ashe, was stricken with cancer, and was asked if he questioned, "Why me?" He said: "I didn't ask God 'Why me?' when I won Wimbledon. Why should I ask 'Why me?' now?"

Don't expect a bouncy Hollywood film. Each mise-en-scene is very still, like paintings, or rather, like the statues in the ubiquitous religious article shops in Lourdes. The air is slightly tense, subdued, until the miracle(s), and then the tone of the film changes. We can relax, we can breathe. The unusual, fragmented camera angles remind me of another incredible (French) film "The Diving Bell and the Butterfly" (which includes a trip to Lourdes), except that in "Lourdes," the camera is a definite outsider, peering over shoulders, from a distance, from on high, and never part of the inner circle, never direct. In "Diving Bell," the camera is very personal, intimate.

I love that a good portion of the film deals with the AFTERMATH of the miracle(s). Having known people who experienced miraculous healings (including my Dad), the film gets it right that the ripple-effect reactions are as varied as personalities. We are never cured of our humanity! Having been to many shrines (not Lourdes), and countless healing services and healing Masses, I have found the atmosphere at them more joyful than the film portrays, however, I was never the sick one.

Is this film coming from a place of faith? Who knows. Whenever I watch a European film, I can't help thinking "post-Christian." But maybe, like the camera, our forebears in the Faith are taking a second look (albeit at a remove) at their own would-be(?) familiar heritage. Lourdes is YOURS, French people!

There is a refreshing lack of denial about human frailty in this film. It's just there, drained of pathos. It's not garishly dressed up. It's OK.

Theology of the Body? There's a slight attitude of a body-soul split, opposition, although there is a good grasp that spiritual healing can differ from physical healing and vice versa.

If you like open-ending endings, you'll like "Lourdes." If not, you'll be asking lots of maddening "Waiting for Godot"-type questions. Don't miss the dead-pan humor. Ultimately, "Lourdes" (the movie and the place) is about finding meaning and not being alone, especially in our grief of whatever kind. What's not to like about that?

--The older you are, the better you dance.

--GOD is a character, and also, specifically, the Trinity, Jesus in the Blessed Sacrament, and the Blessed Virgin Mary. Bravo! Vive!

--Say what you like about the French and their foibles, but thank God they are the fierce keepers of beauty. Admit it—that's why you, too, want to go to Paris.

--Like I tell the teens I speak to: There are no guarantees in life. We may get hit by that proverbial bus some day. But that doesn't mean God doesn't love us. And although we can't always be safe here, we can always be safe hereafter. I beg your pardon—God never promised us a rose garden. Along with the sunshine. There's got to be a little rain some time.

Email ThisBlogThis!Share to TwitterShare to FacebookShare to Pinterest
Labels: lourdes