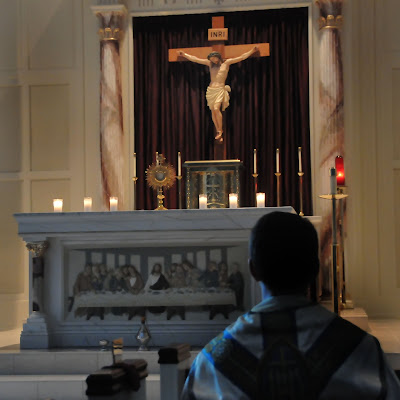 THEOLOGY OF THE BODY STUDY GROUP NOTES
FR. THOMAS LOYA—“PRIESTHOOD,” MAY 8, 2010
[insipid comments by Sr. Helena in brackets]
We have to take back the media. The media belongs to God, like everything else. Bishop Fulton Sheen used to dominate the media! And we can do it again. The media is trying to “bring the pope down,” and they think they can destroy the Church this way.

When the sexual revolution hit, the Church accepted some of it in mentality and practice (never in teaching), and even in seminaries and now we are paying for it.

Recommended books: “Discovering the Feminine Genius,” by Katrina Zeno. Men should read this! We define ourselves in relation to each other. We cannot understand ourselves alone, in a vacuum.

Priesthood is synonymous with maleness and vice versa because of the nature of a man’s body.

Another new book: “Theology of the Body in Context” by William May. It’s good to start with smaller, easy-to-read books and then get to the big TOB text.

We need a theological anthropology. Everything starts with the dignity of the human person. Every single thing has a code, has meaning, purpose and can tell us what it is, what it is ordered to, and that brings happiness because then we know how to relate to it. We walk all around something and really experience it in an exhaustive way.

“Catholic” is not a religion, it’s reality. When we delve into Catholicism, we find an integrality and connectedness to everything.

Theology of the Body is the “soul” of Catholicism. Fulton Sheen was all tapped into TOB pre-JP2G because he was tapped into sacraments, Bible, liturgy, Fathers of the Church, etc.

From “The Priest Is Not His Own” (Sheen): “We forget about the body in the priesthood, but it is the WHOLE person who is a priest.” “We priests are priest-victims. When we say ‘This is my body,’ we must mean/offer our bodies also.”

EVERY man is called to be a priest, but how? 1. At the altar? 2. As priest of the domestic church/his family? 3. single men transforming society? EVERY man is a spiritual priest, called to be fruitful. Every priest is called to LIVE and ACT spousally. His “one flesh union” relates to the Eucharist, and everything connected with that: counseling, administrating, sanctifying, teaching, governing.

Seminarians absolutely need to be formed in TOB! How is a man’s body formed? To spend itself completely, lay itself down, plant a seed, give to another. If one is really giving himself as a priest to his people (the Bride—the whole congregation), he will be exhausted at the end of Sunday. Fr. Loya says he feels exhausted at the end of the day, that he is spent completely, empty, he has given all. The “male thing” is a priestly thing—giving oneself away. He never felt this kind of exhaustion as a layman.

[Jim Stenson, headmaster at Northridge Prep for 20 yrs, sez—(scenario: little boy punches his sister) when women correct, it’s with emphasis on charity: “she’s your sister, you should be kind to her”, when men correct, it’s emphasis on justice, “she didn’t to anything to you, you have no right, who do u think u are?” We can learn from each other to temper justice with mercy and vice versa.]

TOB is NOT NEW. We think it is because we LOST this absolutely essential understanding. Seminarians HAVE to learn to equate their manhood with their priesthood and vice versa. That’s why a man has to be secure in his male identity. Our sexuality is throughout our entire person. If you are confused in your identity as a man, you will be confused about your priesthood. Pope John XXIII sent a secret letter out to bishops in 50’s/60’s saying not to accept men with same-sex attraction into the priesthood. This was not obeyed which caused many problems in seminaries, priesthood.

We don’t JUST image God, we actually “participate in the divine life of the Trinity.”

The world (without God) runs on power, function and usefulness. The world (with God) is sign, sacrament, symbol. [We are participating in something bigger than ourselves! We aren’t making this all up as we go along.]

[The world says that the body is good and sex is the ultimate. But then when it comes to male priesthood, they say the body doesn’t matter. “What? Just because a man has a certain body part, he ‘gets’ to be a priest?” YES!!!! We can’t have it both ways: either the body/sex is good and is full of meaning or it isn’t.]

[Why don’t women WANT to be women, mothers? Because it’s so vulnerable, we have to wait, we have to receive. AND we have been so abused/oppressed by men we’ve decided we aren’t going to take it anymore. And we’re still terrified of that “returning,” if indeed it ever went away. Women are terrified that TOB is a new way to go back to the old oppressive/abuse male thing. And we SHOULD be vigilant about that. Keep being clear and getting it right. Radical feminists threw the baby out with the bathwater. We want to go forward, not backward, but if there’s any reason to go back, it’s to get the baby, not the bathwater!]

Eastern rite married priests have to abstain from their “earthly marriage” (sex) the night before celebrating the “heavenly marriage” (celebrating the Eucharist) to preserve the virginal (“totally God’s body & soul”) and eschatological (new heavens & new earth) dimension of the priesthood!!!! (It has nothing to do with “purity” or “impurity.” Sex is not “impure” for married couples.)

JP2G: “The NEW MEANING of the body will be revealed in the eschaton.”

John Eldredge’s book “Wild at Heart”: A man needs 3 things: a battle to fight, an adventure, a woman to live for (“rescue”). The feminine might take different forms: church, creation, country….

[But we need to give men a better adventure than war (and unjust causes, at that) to give their all to. Sr. Helena has huge theories about this.]

Father says it’s great that the laity have many media initiatives to preach the Gospel, but if they start censuring priests and bishops as to what they can say/not say (e.g., Theology of the Body), it can be like they are setting up a little magisterium of their own. The priests/bishops are ORDAINED to preach the Word of God.