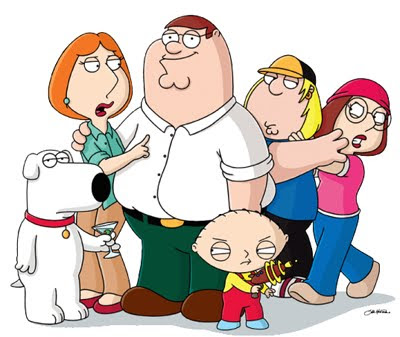 "Family Guy," is a wildly popular animated comedy show that has been running for approximately ten years on FOX (and, of course, on Hulu, YouTube and iTunes) about "family guy" Peter Griffin, his wife Lois, daughter Meg, son Chris, baby Stewie, and dog Brian (the baby and the dog talk like adults). If you've never seen it, you should, because your kids most likely have. Brace yourself.

What makes "Family Guy" so watched? Well, let's start with a chronological comparison with two other animated comedy shows about families. "The Simpsons," in its twenty-first year on FOX, was controversial when it first came out. It's hard to believe this was the case. To compare "The Simpsons" with "South Park" and now "Family Guy" makes it look like "The Brady Bunch." "The Simpsons" focused on a slacker son (Bart) and his dumb Dad (Homer) who never seemed to disagree with or punish Bart's bad behavior.

"The Simpsons" dealt regularly with the hot button issues du jour, and depicted people practicing religion. Some religious people embraced the fact that at least religion was being portrayed as an actual part of people's lives. Others appreciated the fact that there was a lot of love in the Simpson family.

On "The Simpsons," the hot button issues were often dealt with in a seemingly non-committal way: presenting both sides and then withholding judgment at the end or advocating an unreasoned laissez-faire attitude. Hmmm. One of the principles of Media Literacy is that all media are constructed from a point of view. On the part of the media creators: to TRY not to take a stand on an issue while presenting it, to PRETEND not to have a point of view, or to ACTUALLY THINK that one doesn't have a point of view…these are all points of view (and certifiable philosophies in many cases)!

But mostly, perhaps, people watched "The Simpsons" because it was funny. It made them laugh.

1997--Enter: "South Park." "South Park" is about four little elementary school friends (boys) more than it is about their families. "South Park" featured rough animation that looked like crudely cut-out paper dolls sashaying across the screen. The tone was much darker and sarcastic than "The Simpsons," the hot button issues much more explicit, the language extremely vulgar, and the social commentary much sharper. Creators Trey Parker and Matt Stone had set out to expose the lack of logic in America. Abortion, euthanasia, sex-change operations, etc., were examined in head-on detail and defined in an unswerving, unblinking way. There seemed to be a desire to hold America to some kind of honesty. Does the demographic of "South Park," eight-year-old boys, GET the satire? One can hope.

Religion on "South Park"? Lots. The purple dinosaur goes to church, Jesus guest-stars frequently, and no religion is safe or sacred from a thorough skewering. Parker and Stone believe all religion to be bunk, so none are given preferential treatment. The Catholic Church also had its own exclusive moment, with a very crude episode involving the pope and the Blessed Virgin Mary. Parker and Stone even took on Islam recently (but were censored for their own protection by Comedy Central).

Why was "South Park" so loved? It's wickedly witty. There is a kind of brilliance at work.

Thought we'd seen and heard it all with "South Park"? In 1999, "Family Guy" hit the wild, wild, world of entertainment. "Family Guy" took crass "comedy" to a whole new level. (At what point are things just no longer funny?) The tone was even darker than "South Park," with the addition of hollowness, nihilism, mean-spiritedness and profound misogyny. There is a deep-seated hatred of women in "Family Guy." Peter, the dumb father of the Griffin family, is no Homer Simpson. He HATES his teenage daughter Meg—a regular, rather square type--and does terrible things to her that harm her physically and psychologically. The mother of the family, the voluptuous Lois, is the sex object in the home. Her baby, Stewie, and the dog both openly lust after her in over-the-top-I-can't-believe-they-are-showing-and-saying-these-things-on-TV ways. "Family Guy" almost makes "South Park" look like a candidate for a decency award. Jesus also frequently guest-stars, and Terri Schindler Schiavo was recently made fun of (gotta keep those shockwaves coming!). Saddest of all, I've been told that parents are sitting watching "Family Guy" with their kids. And laughing.

Janet McMullen, a professor of Radio, TV and Film at the University of Northern Alabama, says [e.g., regarding shows that appear casual toward teen sex], "It sends a message to kids that sex at a young age is OK, because they're watching it with their parents and the parents aren't saying anything."* I wonder what laughing at "Family Guy" does…. In Pope Benedict's encyclical "Charity in Truth," he speaks of "…a conscience that can no longer distinguish what is human," referring to the affluent ignoring the poor. But can this also be applied to our discernment of media? A great question to ask ourselves with regard to our media use (including media content, the media culture we live in, and the media technology we use) is simply this: "What does it mean to be human? How can my family and I use media in a way that enriches and never diminishes our humanity or that of others?" This is a broad question that encompasses our entire media lives, our tastes, our habits, our time, the influences of media on every aspect of our lives. But if we answer it honestly and prayerfully, we might find that we are discovering and desiring better ways to use our hours of daily screen-usage, even if it requires some tough decisions and resolutions to be made and kept.

"Family Guy" is at a faster pace than "The Simpsons" or "South Park," which suits a speeded-up, insta-media world. Thoughts and words of characters are immediately illustrated as imagined asides or flashbacks, which is very entertaining, but at the same time feels like we're interrupting the story to Google every word, incident, and concept in some kind of literalistic advanced video search tagging indexing reference engine. Is this how our minds are working now?

The creator of "Family Guy" is Seth MacFarlane—a young atheist with a bit of an axe to grind. Search for him on YouTube and listen to him speak for himself on Bill Maher's show (and other places). Another case of a brilliant mind, a superior talent put to questionable ends. (MacFarlane also does many of the voices on "Family Guy.") And it's one of those "this guy is very funny without the raunch" cases. In some ways, "Family Guy" is funnier than "The Simpsons" and "South Park." Deviant funny.

In all three cartoons, fantastical things happen (e.g., suddenly they're in outer space or battling monsters), but the real, everyday situations are just that. Like science fiction, the issues are truly human issues that don't stray too far from home. So to say: "It's just entertainment—what's the big deal?" is to miss the intent of the media creators, the nature of entertainment, and the ways that humans grow, develop, assimilate, internalize, etc.

What can be learned from this little history of animated comedy shows about families? Never underestimate the bewitching potential and power of humor. He/she who gets you to laugh last, laughs best. All the way to the zeitgeist bank. And what do you and your children get?
______