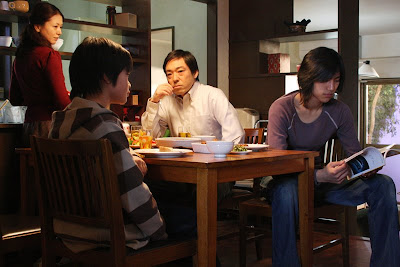 "Tokyo Sonata," the story of a Japanese businessman who loses his job and the impact it has on his family, is (unfortunately) all too appropriate for our times. "Sonata" has already won ten film awards, and has opened in Chicago at the Music Box Theater.

Each member of the family has their secrets, hopes and dreams: the dutiful wife who keeps everyone's secrets, the musically-gifted younger son, the older son trying to find his place in the larger world beyond Japan. When the father loses his job, he is too ashamed to tell his wife, so he pretends and goes off to work every day. He meets up with an old friend in the same condition he is, also fooling his wife. Just the sight of the two of them, briefcases in hand, all dressed up for success and no place to go, is an apt image of the economic crash. The culture of honor weighs oppressively on everyone, and one wonders if family life is really this formalistic in Japan. But in spite of the father's perpetual look of terror, anger and humiliation, this is not a downer movie. We have no idea—and neither do they—how they will solve their problems, so the suspense is taut. We fear the proverbial Japanese suicide-rather-than-failure solution. The plenty of lighter moments keep us hoping this will not be the case.

Our American imprint on Japanese culture is everywhere in "Sonata," for being such a recent influence (WWII), but we know that our countries' histories are vastly different and something else is at work here. There is certainly no Christian worldview or assumptions. The mother is truly the heart of the family and the mediator for the contentious relationships between father and sons. Everyone seems to let their guard down and speak freely and humanly when the father's not around. The father himself lets his guard down when he's not at home. Everyone feels they are playing a role (and the characters speak about this) which the father is directing, as though it is some sacred tradition that must be continued, even though it is making everything worse.

Then, three-quarters of the way into the movie, the movie falls apart. Badly. First, a few false notes creep in and then—who stole the movie? [The very first false note was when the older son returns home from war.] Bizarre misfortune after bizarre misfortune strike and suddenly there is tons of non-subtle humor, and other stuff is funny that's probably not supposed to be funny, and this near-perfect, trim movie is ruined by turning it into either a European-style existentialist film OR some kind of Japanese philosophical meandering. But then, after everyone finishes processing their innermost thoughts by talking out loud to themselves, everyone shuts back up, and we are treated to a breathtaking, hushing, lump-in-the-throat, heart-clinching, hope-filled, non-verbal ending that gets to Dad, too. Perhaps the wildly spun-out-of-control piece was meant to be just that, the surreal free-fall when our world comes apart. And you never know what can happen if you stick it out.

I left the theater smiling ear to ear.

SEMI-SPOILER ALERT: The actor playing the younger, smart-alecky son, was keeping a secret from us, the audience. He really IS a phenomenally-talented pianist!

Of special mention is the elegant, large, clear English subtitles by Linda Hoaglund. Give this woman an award. You will never have it so easy reading subtitles! The grammar is perfect. There are no misspellings. The subtitles are perfectly timed. I truly forgot I was watching a film in another language.
Other films exploring the stress of unemployment:
--Bicycle Thief (1948) The original "unemployed" movie. A father and son circle down into poverty. Molehills become mountains.
--Pursuit of Happyness (2006) A father and son strive mightily to make the right connections and appointments to build a new life.

--Saint of Fort Washington (1993) Mental illness causes homelessness. A veteran of the streets takes a young schizophrenic man under his wing. There but for the grace of God go we.

--Erin Brockovich (2000) Native talent and chutzpah save the day for a single Mom.