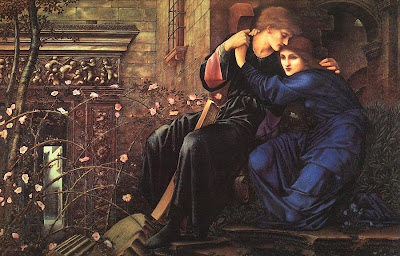 The best translation of HV is at www.vatican.va

--Our masculinity and femininity is the "fundamental element" of our being human. It's everywhere in Scripture.

--In the Eastern Church, the week after Easter is the week of the Bridegroom—"He emerges from the tomb like a Bridegroom coming from His bridal chamber."

--the liturgy's language is conjugal, conjugal relations are liturgical [Sr. Helena is working on this thing: the Church/liturgy has a cycle that has to be respected, acknowledged and celebrated by all--and so does a woman!]

--we reread the "language of the body in truth"—JP2G Fr. Loya likes to call it "honesty." The H zone.

--Paul VI said: for the world to understand HV, they'll have to have a complete, correct understanding of the human person. But a sacramental, Catholic worldview was missing, so most rejected HV, even those who should have known, like theologians.

p. 617 in "Man and Woman He Created Them": The whole of TOB was to give this view of the human person in order to explain HV! That's why the text wraps up with "Some Reflections on Humanae Vitae."

Instead of people starting from the natural order, they start from something else—a desire/will/ideology that they try to twist the natural order into. (E.g., not observing the economic order has caused disaster.)

The order of the conjugal act is twofold, can't be separated: mutual love of the spouses & procreation. The "innermost structure" of the conjugal act is what happens every time, so its meaning is tied up in both these things: 1) union/communion of persons 2) potential for life. So we try to ARTIFICIALLY separate them. If we try to pretend they can be separated with no consequences, we are wrong. [Removing either #1 or #2 is very damaging.]

"Precepts of the natural law belong to the jurisdiction of the Magisterium." In one sense, there's no "teaching" of the Church—we just say: this is what God did / said. The Church is just the press secretary for God.

Priests were not taught how to explain HV. They were taught: "it will change, just tell people to follow their consciences."

Because HV is natural law, it is for ALL men and women.

Gaudium et Spes (GS) and HV are intended to be pastoral documents—the Church understands that women are working, things are expensive, etc., etc. HV not intended to impose anything/hardship. Is there effort needed here? Yes! But the world wants convenience. With the help of God, nothing is impossible. In the process, you'll become better. Just because it's hard, doesn't mean it's wrong. Yes, it involves asceticism. When something is difficult or challenging—we rely on God!

"Pastoral concern" means seeking the TRUE good of man, not just making things easy for people. The pastoral plan is trying to discover the divine plan of God for human love. The best thing is to do it God's way—put it into practice.

p. 626: "responsible parenthood"—generous/prudent accepting of new life OR the need to postpone births for a serious reason for even an indeterminate period of time.

Q: Isn't contraception like taking medicine to prevent something (bad)?
A: No, because pregnancy isn't a disease. You are surpressing a perfectly healthy part of your body, while at the same time trying to use it for ½ of what it was intended for.

Also, sexual intercourse belongs to a particular order. It is ordered to begetting of life. For example: Eating belongs to the order of eating. Throwing up food is not a part of that (bulimia). We are doing something natural (eating) but then frustrating its purpose. Bulimia is contraception of eating.

The world doesn't see how things are ORDERED. The world thinks it's all up to us to order things as we see fit.

An infertile married couple can have sex (without being able to conceive). It's no fault of theirs that they can't conceive, so they can continue to act in the order of sexual intercourse, or old couple, etc.

IT'S NOT JUST ABOUT OUR INTENTIONS, GOOD OR OTHERWISE. If that was so, then artificial contraception and NFP (natural family planning) would be on the same plane. IT'S ALSO, INSEPARABLY, ABOUT THE ORDER OF THINGS, THE "HOW." THE END DOESN'T JUSTIFY THE MEANS.

CONTRACEPTION IS A WORLDVIEW. We contracept all the time: decaf coffee, lite beer, fast food, asphalt, processed food. Contraception means "doing something, but not really doing it." Priests contracept when they go to the pulpit and are too afraid to tell the truth.

Q: How do you talk to people about natural law?
A: Plug into their sacred cows! You might actually share their same values. Affirm that. Agree on something. E.g., atheists are all about being honest. Say: I am too! E.g.: a young woman who wants to get married but not have children wants to be happy, know love—which are good things--(but she doesn't really know how to achieve these which would be to follow God's ways).

When discussing with people: use phenomenology. What are they feeling? What they're feeling is not wrong. It's real and true. They're really feeling it.

Contraception is separating body and soul.

Q: We manipulate and control everything in our lives. Everything. And then in the biggest part of our life—fertility—it's "hands off"????? The difference between having 0, 1, or 10 kids??? We try to extend our domination to even our bodies, personhood, transmission of human life. We turn OURSELVES into an object of manipulation.

We keep thinking we can cheat the natural law, and we always get burned. [God always forgives, man sometimes forgives, nature never forgives.]

p. 630 #5 "TOB is not merely a theory, but a specific Christian pedagogy of the body! Comes from the Bible!"

YOUR BODY KNOWS THE THEOLOGY OF THE BODY. WHEN SOMETHING FAKE/FOREIGN/PROCESSED GOES IN IT, IT KNOWS AND GETS SICK. Cancer needs sugar to grow! Cancer, diabetes, heart disease are because of the bad, fake food we ingest. It's not the fats, etc., in their raw form.

[By obeying nature we're obeying God???? We probably should be "obeying nature" in many more things, too! Our whole lives: food, sleep, exercise, work, social life]

We are acting like we're blind/deaf/dumb—We only ask: CAN we do it? (Never SHOULD we?) Then we do it. (But we don't murder, pillage, just because we can! Hopefully.)

When they told women that mother's milk was bad (the formula companies), and women stopped breastfeeding, they got pregnant even more often (because breastfeeding helps space out births). [It was the awesome Chicago La Leche League of Awesome Catholic Women that reversed that!]

There was much abuse in the pre-Vat II Church of women: The only marriage prep was telling the woman: "never deny your husband." ["If he leaves, it's your fault." Everything was the woman's fault. There was no compassion. Men were told they were animals with no control and given a pass to act as animals. Women were truly abused and victimized. Women were counseled (even in Confession) to stay in abusive, battering marriages. There was no concern for a woman's health with regard to childbearing. The Church needs to acknowledge this and repent. But of course things have changed and we've moved on: TOB! NFP! Yippee!]

Q: What about women who take contraception to regulate their periods?
A: Have they looked at the whole picture: food, sleep, vitamins, etc.? Be suspicious when they tell you to take a pill and everything will be OK. [Contraception pills are used to cure everything: acne, etc. They seem to be used as a cure-all, wonder drug. Is it possible there isn't something JUST to treat the specific problem rather than playing with one's hormones?]

p. 633 #7—"Such a violation of the inner structure of the conjugal act is the reason it's evil." The couple is not really TOTALLY giving to each other. It really isn't love-making.

[Contrary to popular belief] God / the Church wants you to have the best sex possible! [And NFP couples report thus.]

Q: So, no kissing on dates?
A: It depends on what you mean by dating AND kissing. The Church looks at dating differently. Dating is ordered to marriage.

Q: How does a celibate person express themselves sexually?
A: Filial expression of love: hugging, etc., not romantically. The key is living spousally. For religious sisters=Jesus. For priests=Church. Self-mastery is done through all the helps the Church offers us. [We are sexual beings 24/7 and express our sexuality in everything we do.] Gift of self and dying to self. If I were to talk to a group of celibates and a group of married couples, it would sound the same.

Because women are contracepting—they don't "smell" (pheromones) right to men. So men get less interested in them. Also, women pick "Mr. Wrong" when they're contracepting, because their ability to "smell properly" goes off. (For more: see Vicky Thorn's "Biology of the Theology of the Body" DVD/CD http://www.theologyofthebody.net/ )

The womb is the tabernacle. If we can mess with that, the most sacred place, then why should anything else be sacred?

Even the way we COMMUNICATE is contraceptive: cell phones constantly interrupting, "always being available" [which is also "promiscuous". Is it even a good thing to be "always available"?]…. NOT REALLY DOING WHAT YOU'RE DOING. "AGE QUOD AGIS"—Latin for "do what you're doing."

Q: M. TERESA AND JPII FOCUSED ON EACH PERSON IN FRONT OF THEM, like they were the only ones. [AND THEY HAD AN EXCUSE THAT THEY WERE "TOO BUSY."]

MAKE A LIST OF ALL THE WAYS WE "CONTRACEPT": CREDIT CARDS, DAYCARE CENTERS, MULTI-TASKING. We're not really buying things we can afford. We don't really own them. We're not really raising our own kids. We're not really giving our attention fully to any one thing. [A young kid reported that "talking to one person at a time is boring"—young people IM several friends at a time.] Fr. Loya had a young kid interrupt his confession to answer his cell phone!!!! [Someone else reported a priest answering the phone in confession!]

NFP families live a spirituality of generosity—they give the most $, are generous with their time, etc.

If married people know so much about sex/marriage, why do 50% of marriages fail? If you crash your car 50% of the time, wouldn't you have to say you're a bad driver? Living spousally is the same for celibates and married couples.

Everything rises and falls on contraception because it's a WORLDVIEW.

Interior world view=ethos. It's what's in the heart or not that effects our whole outer world. That's why Jesus was so concerned about what was going on in our hearts.

SPIRIT OF THE LITURGY—BY CARD. RATZINGER. READ IT!!! IT'S THE THEOLOGY OF THE BODY IN THE LITURGY! IF YOU MESS UP WORSHIP, YOU MESS EVERYTHING ELSE UP.

The below stats are from Janet Smith's book "Why Humanae Vitae Was Right." They are several years old. (HV predicted these things.) 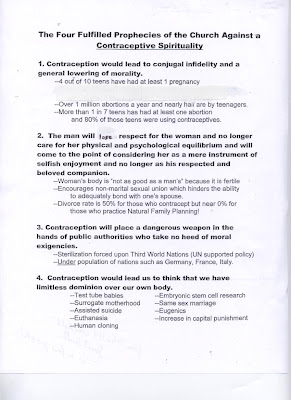