MOVIES: “DIARY OF A WIMPY KID” 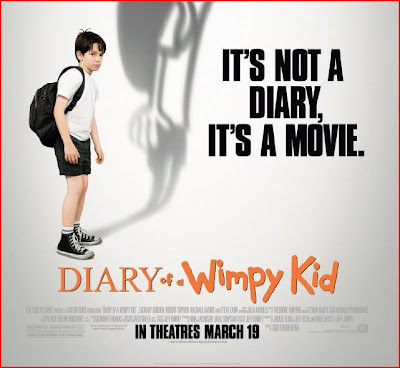 "Diary of a Wimpy Kid" is the best movie of 2010! Hands down. It's what we call in the biz "a perfect movie," because everything about it is sterling: the acting, the story, the dialogue, the soundtrack, the pacing, the humor, the editing, etc. Everything clicks. And pops.

Greg Heffley (Zachary Gordon) is going to Middle School for the first time, and is trying to navigate and negotiate the labyrinthine, unspoken rules of popularity, coolness, behavior, traditions, rituals, etc. But mostly popularity. Greg is an overly-articulate little operator who desperately wants to be popular and is constantly scheming new ways to get to the top. He is even willing to sell out his decidedly uncool best friend, Rowley (Robert Capron). There are many layers to a tween's life, and Greg's include: a sadistic older brother, baggage from kindergarten (yes, kindergarten), where to sit in the cafeteria, bullies, girls, sports, growth spurts (or lack of them), and general pre-teen angst.

Greg is a keen observer of his own life, and journals and doodles it all. He is precociously civilized, dignified and refined for his age. But he's hell-bent on using his gifts (rather unsuccessfully) only for his own advancement. The moral of DOWK? Ambition and temptations to compromise on what's right start young. Greg is off to a bad start for most of the movie. Greg's only hope for salvation is learning the meaning of true friendship.

DOWK avoids all kinds of movie-making tropes, and is a surprisingly fresh and profound take on young people's development of character. There is no snarkiness or smart-aleckiness. Just kids as kids trying to survive and make their way in life, getting involved in downright hilarious, yet not too impossible, adventures. DOWK is non-stop entertainment—including adolescent boy gross-out humor—but it's never quick and cheap: it's all expertly folded in to a fully-fleshed out story. Every scene deftly advances character and plot. DOWK could be a model for how movies are supposed to be made, without being textbook, formulaic or trite. We don't see what's coming next (unless, perhaps, you've read the books, which I haven't). The props, sets and scenery are jam-packed with delightful sights. Visually, DOWK reminded me a bit of the kid-favorite movie "Matilda," especially the schoolyard scenes.

A wimpy kid exorcising his demons by writing about his own wimpy life and thus becoming a star is just a great underdog concept. I've always thought that growing up is harder for boys than for girls, what with all that stress on being macho and tough. Greg is a small for his age and it seems his only defense is to live by his wits. But Greg is often too clever for his own good. Even dorky kids are eventually liked for persistently and genuinely being themselves. Greg's grandiose ideas of himself and his future need to be tempered by the things that really matter in life. Can we adults learn from a wimpy kid's diary? You bet.

--ALL the many families in my theater stayed through the credits (a great rarity in Chicago).

--On the way out of the theater, the Mom of a family with three young boys said: "They [the boys] said this is the best movie they've ever seen. And it was just like the book."

--Great TOB scene involving the older brother: Mom confronts him with a sports magazine found his room with a scantily-clad woman on the cover.

--The kid actors have great comedic timing. This is truly one of the funniest comedies I've ever seen. VERY creative. Why aren't there more movies like this?

--Something like "Malcolm in the Middle," but way better.

--The filmmakers really remember what it was like to be in Middle School.

--Bless me, Father, for I have sinned. I should NOT have stifled my laughter in the theater!!! This movie was very, very, deep-down, belly-laugh funny.

--Stellar transitions and cuts. The movie NEVER bogs down or loses your interest.

--The adult and kid actors in DOWK do not have perfect looks! Braces galore! All kinds of imperfections!

--Greg can't catch a break and just digs himself in deeper and deeper (like Jennifer Aniston's character in "The Good Girl.") This is great drama. "Oh, what an evil web we weave…."

--There are too many funny predicaments to count: The safety guards with the kindergartners! Drawing the three teenagers' ire by scratching their red pickup truck! THE CHEESE! Ha ha ha. -

--Your tween vocabulary word from movie: "tool." Look it up in http://www.urbandictionary.com/

--As Goldilocks would say, this movie is JUST RIGHT.

Email ThisBlogThis!Share to TwitterShare to FacebookShare to Pinterest
Labels: diary of a wimpy kid