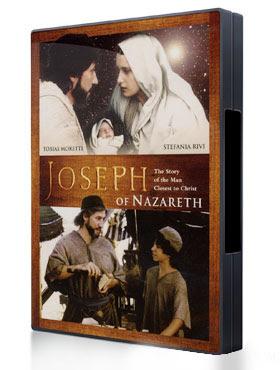 Finally! St. Joseph has his own movie! "Joseph of Nazareth" on DVD, distributed by Ignatius Press. How is it? Not bad. Italy has been producing some ambitious full-length feature-film saint movies of late ("St. Maria Goretti, "Fr. Gnocchi"—quickly changed to "Father of Mercy," "St. Anthony," "Blessed John XXIII," etc.).

Joseph (Tobias Moretti, who looks a bit like Charles Bronson) is a strong, hard-working man of peace, but he's also a man of justice and his temper flairs when provoked by injustice. (He is not beyond grabbing someone's burlap tunic or smashing a clay pot or two. No milquetoast, this Joseph.) One thing that struck me funny is that Joseph is rather, well, talkative! (As is well known, Joseph has absolutely NO lines in the Scriptures. Not even "Yes, Lord." And I've always loved this because he doesn't need them. He was a man of action and obedience.)

Joseph has a lovely British accent, as do most of the other actors. If you liked "Jesus of Nazareth," you'll like "Joseph of Nazareth." It's a full-blown Bible movie of the grandiose sort we are now well-used to: sweeping, symphonic, Middle-Eastern-y soundtrack; elaborate costuming; elaborate scenery and props—sandy terrain, goats, humble huts, the Temple, evil kings and good kings, camels, Roman soldiers.

I was picking the film apart for Scriptural and theological errors as I watched, but it seems to pass muster in the main. (Ignatius Press is very choosy about the movies they carry and are pretty unimpeachable in their choices.) Each DVD case contains a 10-page booklet which includes an article by apologist Carl Olson on Joseph in Scripture. "BetaFilms," who produced "Joseph," were definitely trying to get it right, without being slavish about literally reproducing a verbatim rendition of Bible accounts. There are some clever plot points and reveals that will delight those knowledgeable about Scripture.*

The much-talked-about Joseph in the movie "The Nativity Story," who almost seemed to steal the movie from the Blessed Mother, is a younger, more carefree man than this Joseph who keeps stressing that he's older than Mary (for the census in Bethlehem he says he is 37). This Joseph agonizes over what to do with the suddenly pregnant Mary. He must physically protect her and Baby Jesus as they flee from Herod into Egypt in some tense scenes. He has a backstory with the treacherous Herod.

This Joseph knows who he is. He gradually comes to understand his role as the true earthly father of Jesus (heartily acknowledged by Jesus and Mary). But this Joseph was always a good man, which prepared him for the momentous part he would play in the drama of salvation history. He always trusted God's promises, God's unquestionable ways, while others around him lost faith or railed against God. Actor Moretti has incredibly large, luminous eyes that convey Joseph's inner life of prayer and an ability to imagine the unimaginable as it's unfolding. Joseph's God just gets bigger and bigger.

What about Mary? She is very pretty. Not beautiful. Pretty. Very pretty. She doesn't seem to age, either (a result of original sin). In "Joseph of Nazareth," SHE is the silent one! She doesn't say much, (the Magnificat at Elizabeth's house is reduced to one sentence), she seems to worry a bit which makes her appear vulnerable and truly in need of Joseph! She seems a little clueless now and again. Mary's pregnancy is handled rather awkwardly. At a certain point she says to Joseph: "It's not what you think" (after he ascertained she wasn't unfaithful or forced). I almost laughed. Poor Joseph! Um, what else could it be?? There could have been LESS fictional intrigue and exposition, and MORE non-fictional historical-theological exposition which is even more exciting! It's not clear exactly where Mary's baby came from. Suddenly, she is the pregnant "Mother of the Messiah." St. Anne and Joseph look a bit gullible in this scene by just accepting Mary's word about a "voice." The phrase: "The Holy Spirit will overshadow you" is left out. Every single syllable of the Annunciation dialogue is important, and I think these immensely vital scenes could have been fashioned better. Believers will fill in the blanks, but when we watch a movie, we shouldn't have to do that--the movie should tell us everything we need to know. I also watch religious movies with a "secular eye." Will this at least make some kind of logical sense to a non-believer?

Mary's intent to be a perpetual virgin is not totally clear (she tells Joseph what she told the voice at the Annunciation: "I asked him how this could be since I'm not married yet"). This kind of changes the meaning of what Mary actually said. Mary would never have asked the angel "How can this be?" UNLESS she intended to remain a virgin even after "living with Joseph." Mary was already betrothed to Joseph (but had intended to remain a virgin, most likely with Joseph's knowledge/agreement, or with his knowledge/agreement forthcoming) and it would have been the most natural thing in the world for her to become pregnant by Joseph soon enough IF she wasn't planning to remain a virgin. (The angel didn't tell Mary exactly WHEN she would become pregnant.)

There is some pain in her childbirth, but then a sudden (miraculous?) birth. The pain depicted in Mary's childbirth in "The Nativity Story" caused some Catholics to boycott/badmouth the film. It is true that pain in childbirth is a result of original sin (which Mary was free of), but God told Eve: "your pain in childbirth will INCREASE," suggesting that there was some kind of at least discomfort in childbirth before original sin. As C. S. Lewis writes in "The Problem of Pain," not all pain is a bad thing, and he gives the example that after running for the sake of exercise, our muscles ache in a good way. See Paul Haffner's excellent book: "The Mystery of Mary," for what the Fathers of the Church teach on this.

Mary dances for the Lord a little in the beginning. Very sweet. There is genuine affection and admiration between Joseph and Mary, a natural, chaste, tactile interaction between them. It's just wonderful watching the interchange of the Holy Family, the most chosen among the Chosen People! They reason things out together with God's reasoning.

"Joseph" is a great film to show the concept of vocation: people knowing who they are and what God is calling them to be and do, and then following it unreservedly, even when things are difficult and unclear. Even the twelve-year-old Jesus is fully struck--in His humanity—by His mission as He enters the Temple for the first time and knows He is home. (I love that He is upset by the moneychangers NOT because it was commerce in the Temple, but, as He says: "How can anyone PRAY with all this noise?" The moneychangers that the older Jesus gets angry with were selling in the Court of the Gentiles, where non-Jews could go to pray. That's why Jesus says in His anger at that moment: "My house will be called a house of prayer for all peoples!"

The lack of using angels in films (I like angels! I wanna see their beautiful wings, or at very least their human form!) almost obfuscates what God is doing. There are no angels for the Annunciation, Joseph's dream, and not even, for pity's sake, the Christmas angels! There's just a really strong sun, a voice, and a really bright star. Soooo people are just acting on the direct voice of God in their heads. But that's NOT what the Scriptures say. There's a reason God uses intermediaries, witnesses as it were. Messengers who speak God's word out loud. It makes Mary and Joseph sound "less crazy" to an unbeliever. Bring back the angels! Away with the blobby lights!

I like almost all the "Life of Christ" movies. Each one has something to offer and some great parts. But none fully satisfies. That's how I feel about "Joseph of Nazareth." But there's some parts that you're really, really, really going to love.* Joseph, the virginal father of Jesus (not "foster father"), who LITERALLY—more than any other man with his child—was called to take the earthly place of God the Father, is the greatest saint in heaven. And this movie is a swell attempt to give him his due.
_______________
*I'll never tell which ones. Watch it!

--The Magi are from Persia! Correct! Yay!

--Joseph uses the Magi's gifts to get to Egypt! Yay!

--The shepherds give gifts, too! I never thought of that! What do they give? Why, a LAMB of course! (And remember, Jesus ended animal sacrifice!)

--Why does Joseph force Mary to go to the census? Because he's a "just man"? Do you think Jesus ever got counted in the census? Are censuses evil? Remember David regretting having his people counted? There's some talk in the movie about "only God can count his people."

--Big emphasis on us being God's "servants."

--Actors are not cardboard! Lots of fluidity and emotions!

--Methinks there were better means of communication back in the day than portrayed in the film. Merchants, pilgrims, etc., were constantly travelling around the ancient world…. And word of mouth is still effective. Even today!