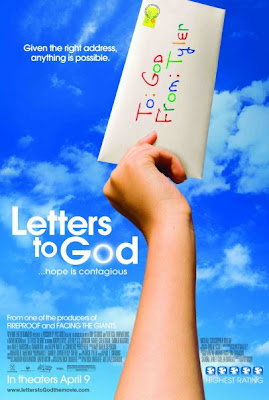 "Letters to God" is based on the true story of a little boy with cancer who wrote letters to God that he would then hand to the postman. And you think you have dilemmas at YOUR job. LTG is directed by none other than David Nixon, the director of "Fireproof" and "Facing the Giants." All we need to do is clone Mr. Nixon so that he can make lots and lots more movies.

LTG is a bright story of a child's faith that is more grown up than everyone else's around him. Although dealing with sickness and death, this is a real "feel good" movie for the whole family. For cynics who may think (with regard to faith): "Nobody thinks or talks that way"—think again. Millions of Christians think and talk this way. Tyler Doherty (the effervescent Tanner Maguire) is a mischievous, soccer-playing kid who just happens to be bald due to his chemotherapy. His best friend is a spunky tomboy , Sam (the equally ebullient Bailee Madison), who defends Tyler from teasing at school. But Tyler's not worried about being teased. The only thing Tyler is worried about is forgiving, being like Jesus, and trying to help others get to know God. It's all so obvious to Tyler, but not to his Mom, his older brother or his classmates, and certainly not to his troubled postman, Brady McDaniels (Jeffrey S. S. Johnson).

Brady is a divorced veteran with a dark secret and a drinking problem. (Kudos to Christian filmmakers for showing a bottle of Jack Daniels in context! Showing tragic behavior AS tragedy is not condoning. That sounds simple, but Christian filmmakers tend to shy away from portraying "bad stuff.")

When I first heard about "Letters to God," I thought: what a fantastic concept! Why didn't someone think of this before? Forget the letters to the man in the red suit! How about letters to the Man in the crimson suit of His own blood who brings us the best gifts of all? OK, that's a little florid, but I just got so enthusiastic about the premise of this film. And then I found out that the film was based on a true story of an actual little boy who thought this all up.

The best part of LTG (besides it being WELL-LIT—many thanks to the key grip or best boy or gaffer or whoever is responsible—and filmed in what looks like glorious TECHNICOLOR) is that it teaches us how to pray without being pedantic in the least. Grandma just naturally holds hands with her grandson and prays when there's a need. People bust out in short prayers whenever and wherever appropriate. Again, if anyone thinks that millions of people DON'T do this on a regular basis, maybe they need to get out more. Mingle more.

QUASI-SPOILER ALERT: Tyler gets almost his whole town writing "letters to God." He shows them how easy it is to pray. Yay! We get to hear not just all the townspeople's different prayers, but the unique voices and styles that people pray in—because everyone IS a unique individual with a unique relationship with God. (You can write your own letter to God at the movie's website: http://www.letterstogodthemovie.com/ under the tab: "Share the Hope"!)

The pace of the movie is definitely Southern. Mayberry slow. Deal with it. LTG never dips down into the dregs of the pain, loss, horror, or chaos of terminal illness, but I daresay not everyone experiences terminal illness the same way, either, and some may be little chosen "warriors" like Tyler. Tyler is a wonderful new kind of film hero. One who never loses faith, hope or love (when he has every excuse to). In fact, he defends God, faith, hope and love to everyone around him as he tries to get them to "ut cognoscant Te" ("to know Thee" is eternal life--see John 17:3).

The theme of community is strong in LTG. Together we "bear one another's burdens" and sorrows become lighter. Those characters that isolate themselves suffer most.

Tyler knew that we come from God and are going back to God, and that life—no matter how many years we are granted—is short.
Tyler knew where he was going. Do we?

--When I first heard the film title: "Letters to God," it reminded me of a great song by the father of Christian Rock, Larry Norman (1947-2008), called "Note from Mr. God." Here's a music video a college student created to go with it:

--Our Evangelical brothers and sisters keep it refreshingly simple.

--Is LTG too pollyanna? No, barring a few hokey moments. It doesn't shy away from people's generalized anger at God or from life's Big Questions, and doesn't answer them with easy (and often ghastly) "God's will" answers.

--Best use of eyebrows in a film.

--A word about lighting on TV and in films. I am sooooo sick of murky. Sometimes I have to turn all the lights off in the room to kill the glare on my (old) TV screen, and I still can't make out what's going on in that back alley or office or hospital room or courtroom or whatever (cop/lawyer/doctor TV shows are the worst offenders). And God help you if it's a dark, RAINY night. The murk will then be SHINY and indecipherable. Splurge on some lightbulbs, people!

--Jesus knows we get discouraged: "Pray always and never lose heart," Luke 18:1. There's a fantastic book of Blessed James Alberione's called "Pray Always" which is out of print but I'm sure can be procured on Ebay for one of your kidneys. For some reason, out-of-print religious books sell for megabucks.

Email ThisBlogThis!Share to TwitterShare to FacebookShare to Pinterest
Labels: letters to God