THEOLOGY OF THE BODY: FOR TEENS PART 2 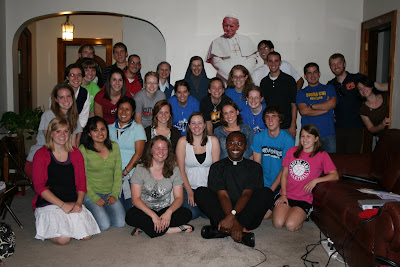 How do good Catholic teens answer why it's wrong to have sex before marriage (before they learn TOB)? (Pat makes it real: "What do you tell your buddy at a party when he's ready to go upstairs with his girlfriend?") The students usually say: "It a mortal sin." (And after a little theology/philosophy: "It's INTRINSICALLY evil." They love that.) Then Pat says: do you really think that will stop your friend?

HERE'S A STUDENT'S ANSWER "AFTER" THEOLOGY OF THE BODY:

SEX BEFORE MARRIAGE? (ONE STUDENT'S "WHY NOT")
1. It's always using someone.
2. You're not giving a total gift and the language of the body (sex) says: "forever."
3. It's adultery in advance. (You are being unfaithful to your future wife/husband.)
4. It's re-gifting yourself.
5. We're supposed to be mirroring the "forever" love of the Trinity in our one flesh union, but in pre-marital sex we're sending a message of defiance to God. How does that feel?

It can be a lot of FUN with teens, actually, when you do apologetics with them and let them come up with their own ways of explaining TOB to their peers.

Youth need STRUCTURE. So even if you can digest JP2G's TOB, you need to break it down for teens into easily memorizable soundbites (that they can feel confident using with others).

We need to convince teens that the Catholic Church has something they are missing and need.

We don't challenge teens enough. We really lower the bar. They want the "ethos"—we need to show them the big picture (in a way their not-fully formed brains can handle).

What enabled those young boys to do what they did?
--training, instruction: REPETITIVE SLOGAN THEY COULD SAY TO THEMSELVES IN THE MIDST OF BATTLE:
"aim small, miss small"
--love for their brother
--confidence in their father

We're in a cultural war, a spiritual battle. "Steady…" You can do this…

E—EXPERTS: we have to consider ourselves experts and make ourselves experts in this area (TOB). When adults get into TOB, they realize their own woundedness, and that's good! We can grow, too! We have DA COACH: VJP2G
T—TREAT them as LEADERS. Let teens know that we believe in them and want them to advance and be even better than us! Isn't that what good parents, do? Let them know that their friends/peers need them. Teens need to hear adults say: "I believe in you."
H—HANDLE HOT BUTTON ISSUES. Go there. We are not shadowboxing. In "Patriot," Mel Gibson's kids knew what they were doing. HEAR THEM OUT. Young people have a lot to say.
O-- ORIENT THEM TO CHRIST AND THE CHURCH. They HAVE to see the relevance of the Christ and the Church. Where can they go for answers in this crazy, mixed-up world? God came to re-integrate the spiritual and physical.
S—SHOWTIME: Using movies for TOB: the world is NOT that far off in the sense that we are all desiring the same good things…. Show teens how they can find TOB in the pop culture! Let THEM be creative.

Men are called to be warriors, defenders, lovers (not players), priest-father. (4 archetypes: men are more simple)

Women are:
(12 original mysteries of women: women are more complex)


In short, the one who is loved.

S- Stealth/ Sneaks up on you

No longer a virgin? God can RE-CAPACITATE you to have the CAPACITY to make a total gift of yourself! ["See, I make all things new!" Revelation 21:5]

Married couples don't "LOSE" their virginity (sexual integrity), they share it with each other.

Teens love: LANGUAGE OF THE BODY, THE OPPOSITE OF LOVE ISN'T HATE IT'S USE, GIFT OF SELF, TABERNACLE (guys love the concept that a woman's body is a living tabernacle—no man is really ever worthy to consecrate the Host OR to approach a woman). A man even genuflects when he proposes!

There are very few "stories": boy meets girl, boy loses girl, boy fights for girl, boy gets girl. It's like the Mass, the Jesus story.

SCENE FROM "GROUNDHOG DAY" WHERE BILL MURRAY'S CHARACTER IS TRYING TO SEDUCE THE GIRL HE LIKES. HE LEARNS ALL ABOUT HER SUPERFICIALLY AND SAYS THAT HE "KNOWS" HER. BUT SHE DOESN'T BUY IT.

Pat assigns his seniors to write "TOB personals"!! Our teens are capable of A LOT!!

HERE IS ONE OF THE PERSONALS FROM HIS STUDENTS: