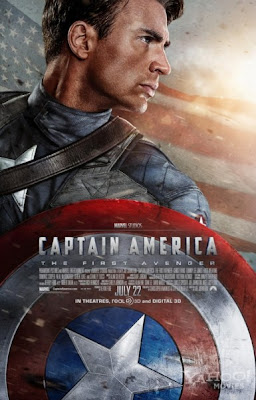 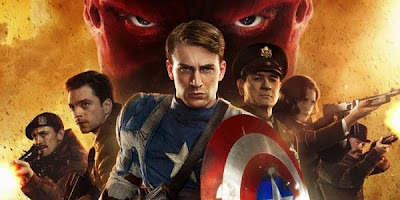 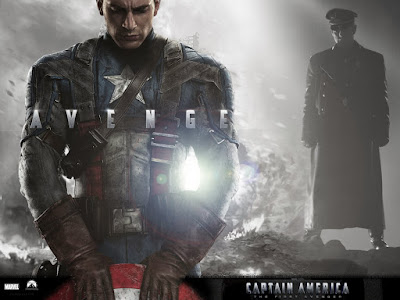 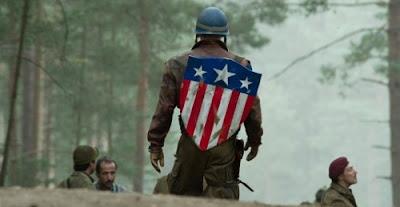 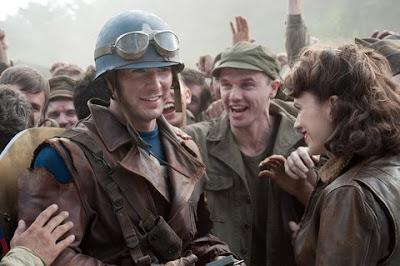 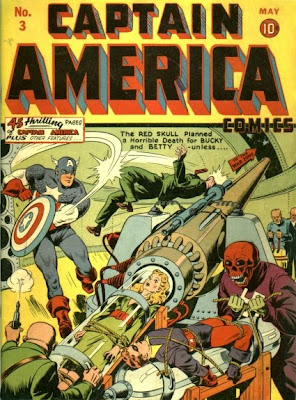 “Captain America” is yet another superhero movie in what an “Entertainment Weekly” columnist calls a “glut” of superhero movies. What makes “Captain America” different from the others? It’s a period-piece (WWII), it takes a profound look at the very specific nature of Nazi evil, has visual effects and action scenes to give Michael Bay a run for his money, and has miles and miles of heart.

There are several poignant, small, quiet, touching scenes in the beginning of the film that set-up Captain America’s inner self. Captain America is actually Steve Rogers (Chris Evans), a slight little guy from Brooklyn who never backs down from a fight, and who is desperately trying to enlist in the military but keeps getting rejected because of his size and health. An Einstein-like doctor (Stanley Tucci)—before transforming Rogers into Captain America (also Chris Evans)—gives him advice about not changing from the good man he is after he gains his mighty new powers. He also tells him: “Strong men don’t value strength, they take it for granted, but a weak man values strength…and compassion.” Rogers takes this advice, and in a biblical-style showdown with evil he readily admits to his “nothingness,” wherein lies his strength.

Eviler-than-thou Johann Schmidt aka “The Red Skull” (alter egos abound!) is Captain America’s nemesis. In a fresh antagonist-twist, Schmidt decides he’s greater than Hitler and quests after his own world domination. Schmidt is played to the teeth (he has great teeth) by Hugo Weaving (remember creepy Agent Smith in “The Matrix”? He’s also “V”--whose face we never see--in “V is for Vendetta,” AND the voice of Megatron in “Transformers”!)

For all the red, white, and blue splattered everywhere, and the moniker “Captain America,” the “rah, rah, USA!” factor is played way down. The war effort is clearly an international affair with Brits and Frenchmen, and the Americans include various nationalities, with a special nod to Japanese-Americans.

“Captain America” is a lush, all-stops-pulled-out, old-fashioned, movie-going extravaganza experience. So even if you don’t like comic book culture or wham-bang action/explosion movies, you’ll probably enjoy “Captain America,” which leaves plenty of room to breathe between shoot-‘em-up scenes, developing some surprisingly finessed dramatic storytelling along the way.

The philosophical/occult roots of Nazi science-meets-mythology ambitions are well portrayed.

Captain America is a great “David and Goliath” story, really. Brains and guts win the day. Steve Rogers is not a lover of violence. When asked if he wants to kill Nazis he says: “I don’t want to kill anybody, I just don’t like bullies.”

--How did they make Chris Evans so skinny as Steve Rogers?

--Chris Evans is from Massachusetts. He turned down the role several times before signing on. The studio was totally justified in waiting for him.

--Kudos to director Joe Johnston and cinematographer Shelly Johnson (a dude) who hadn’t really done anything spectacular until CA!

--Marvel Comics has a very cool video-logo of actual comic pages scrolling in a whizzing-filmstrip fashion.

--Norway is the fitting locale for the secret hiding place of a powerful force (riffing off nuclear power, no doubt). In reality, during WWII, the Nazis were trying to develop an atomic bomb in Norway. Of course, it takes time, and they were at the heavy water stage or something, but it was foiled by some heroic Norwegians, several of whom lost their lives in the process, first by breaking into Nazi labs, and then by sinking a ferry containing important bomb-making components, forcing the Nazis to scrap the whole program as their fortunes turned in the War.

--The screenwriters did their historical homework.

--Checkout the loooooong list of credits for “Visual Effects” on www.imdb.com. Wowza.

--So grand to see Tommy Lee Jones in a made-for-Tommy-Lee-Jones role!

--Prediction: Chris Evans shall go places. He has that “stillness” that is needed in actors (as opposed to “twitchy”). I get the feeling he’s just at the beginning of his range of what he can do. He didn’t overreach in this movie, which I think was wise. There’s a vulnerability/humility to his acting and to the way he portrayed Rogers/Captain America that is endearing. Unlike "actor" Daniel Craig who is just ALL smug swagger and he has nothing to be smug about because he is NOT an actor and besmirches the profession. I just had to say that because I just saw him in a preview.

--There can never be too many movies about Nazis. We really need to be reminded of the whole scope of what happened there.

--Sweet love story between Steve Rogers and a female officer of higher rank.

--Strong bookends and ending that segues us for the sequel(s).

--“Stay a good man.” Isn’t that the conundrum of every soldier? But often they can wind up simply trying to “preserve their own humanity.” Of course, the big picture of WWII was so much more clear-cut than other modern wars as far as good vs. pretty pure, unadulterated evil.

--The hands-down BEST Holocaust movie for kids is “The Boy in the Striped Pajamas.”

--There’s still that “invincible American” feel to the movie, AND defying authority/orders and then being rewarded for it. However, there are lots of battles where CA is fighting alongside others, so he’s not quite the “lone ranger.”

--Science enables brute power. Brute power enables science. Watch out for those little bespectacled guys scurrying around with briefcases full of equations. They’re just as dangerous as the brawn.

--Red Skull thinks he’s the man of the future and Captain America is just in denial. Captain America simply says: “Not my future.” That’s right, folks! We don’t have to buy into any evil future we don’t want to!