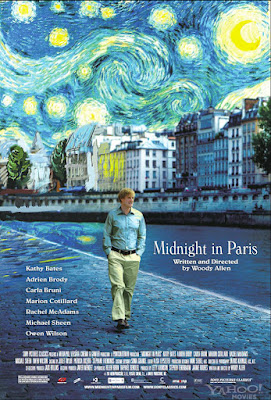 Can you say "best movie poster of 2011"? VERY smart to only have ONE poster for a movie to "brand" it! (Especially when it's this good and says everything about the movie in a nutshell.) Not only is it totally eye-catching (especially if you like Van Gogh, which I pretty much do), but it's truly evocative of the story.

"Midnight in Paris" is being called by some "Woody Allen's best." Only having seen a handful of Allen's movies, I wouldn't be a good judge, but "MIP" is enjoyable, even with its kind of low-tech, simple 70's-style cinematography (whether intended or not, I don't know). And Owen Wilson proves his mettle by pulling off an act that maybe only Owen Wilson could. The part he plays is deceptively difficult, because it seems like he's actually playing the part Woody would play: a funny, neurotic mess. As someone said: "This is Woody's best because he wrote it, directed it and stayed out of it."

I don't think I'm giving too much away when I say "Midnight in Paris" involves time travel. Another feat for Wilson. It also involves the literary/artistic past, but you don't have to be an effete snob to know who Hemingway or Picasso is. OK, I was a little shaky on Gertrude Stein, but I just went with it and got it from the context, OK? "MIP" is laugh-out-loud funny. One woman in my theater laughed out loud at all the NON-funny obscure literary/artistic references just so we'd all know she got it.

Being incredibly cultured myself (except for Gertrude Stein), which means I was forced to read "The Old Man and the Sea" in high school, I got into a fit of laughter when Hemingway starts TALKING LIKE HE WRITES, which you--being equally cultured--know is short, bold, staccato sentences. Hemingway is played by Corey Stoll--who outshines every other minor character in the movie. Adrien Brody is a close second as Salvador Dali (but he should have had a longer, twirly moustache), and Carla Bruni (France's first lady) comes in third as an understated, lowly tour guide.

Indubitably, Woody Allen had his actors ad-lib in that wonderful, overlapping, realistic, interrupting, Jewish kind of way. Wilson was frighteningly superb here, whereas Rachel McAdams seemed to be striving to keep up. Lots of funny two-ring circuses going on in backgrounds....

My one big gripe with the film is what my screenwriting professor at UCLA, Hal Ackerman, called "the blurt." Where you just spill your guts and tell us exactly what we're supposed to know with no artistry or hidden exposition. It happens at the end of "MIP." Owen Wilson and the Marion Cotillard character just start disgorging themselves (to us) as to what the whole movie is about. We get it! We get it! A million times over: We get it!

--Should have kept to the "bells tolling at midnight" trope for Cotillard's time travel!

--No one from yesteryear seems to notice or mentions how weirdly they're dressed. That didn't ring true.

--Great audio-only lead-in at beginning of film, setting the scene.

--"Nostalgia is denial of the painful present."

--Absolute funniest time-travel line from a hypochondriac: "They don't even have antibiotics."

--I was asking myself why these particular writers'/artists' art has endured.

--A lot of butt-focused shots. Of the female variety. A lot.

--It's interesting that the French (as many cultures today) have separated love from life (including infidelity, contraception), but they make it LOOK like they have all the trappings of love. Tres interessant: the visceral reaction of French women to the IMF's Strauss-Kahn rape accusation. The "dirty little secret" is that sexy, enlightened, liberated French women feel...wait for it...used and abused??!!

--Hemingway's (good) advice to writers: "A writer needs time to write." "You don't want the opinion of another writer: writers are competitive." "You'll never write well if you're afraid of death."

--My mother sez halfway through the movie: "This is fun!"

--"MIP" is a great concept. Feels like there could be lots of spin-offs!

Email ThisBlogThis!Share to TwitterShare to FacebookShare to Pinterest
Labels: midnight in paris