MOVIES: "PIRATES OF THE CARIBBEAN 4" 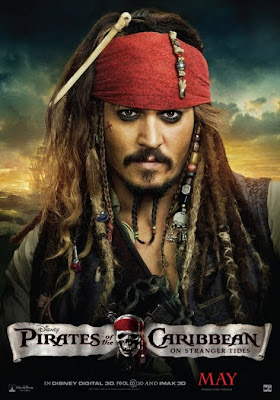 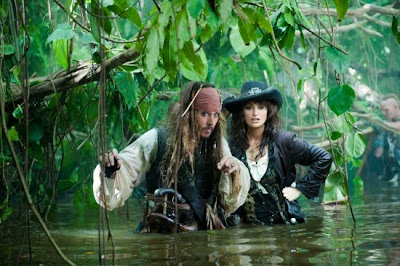 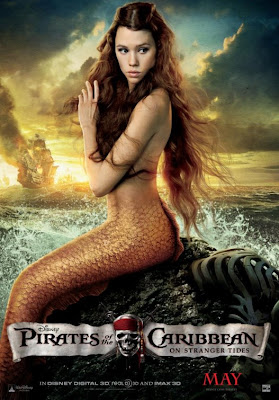 Not bad! I was pleasantly surprised and caught off-guard! My 8-year-old nephew rates it: "medium." (He needed a little help following the plot.) His favorite line: When Cap'n Jack Sparrow calls the King "His Hiney" instead of "His Highness."
"Pirates" 4 starts off without any belabored "catch ups" from the previous installations--a welcome relief. It's just all Johnny Depp all the time which is the whole reason we go to see "Pirates" anyway, right? Lots of chases and swashbuckling.

Penelope Cruz is Jack Sparrow's new love interest which is fitting because "Angelina" is supposed to be from Spain. Ian Mcshane is a fantastic, heartless Black Beard (or "Mr. Beard," as Jack Sparrow addresses him). There are cameos by Keith Richards and Judy Dench.
Geoffrey Rush reprises the role of the
(peg-legged) Captain Barbossa. (He's the only one that does convincing ARRRGGG pirate-speak.)
There is a prominent role for religion(!) in this "Pirates."

The absolute coolest introduction is the MERMAIDS. They're a little on the vampire side (you'll see). A mermaid's tear (how cool is that?) is needed for a ritual, so one mermaid is captured for the sake of a fresh tear. The mermaids may have shown a little too much skin(?), but I would need a man's honest opinion on this. Sometimes they had scales covering them up to the collarbone, sometimes the scales were only to the waist (with their long hair cascading strategically). Methinks they should have been consistently to the collarbone. Of course, it's not only a man's opinion that needs to weigh in here. Females need to reflect on how they're portrayed and how that makes them feel/act/react/try to imitate.

Astrid Berges-Frisbey (also a Spaniard!) plays Syrena, the captured mermaid. She manages to create this ethereal, other-worldly character so astonishingly well that she has set the new standard for cinematic mermaids (all apologies to Daryl Hannah), and there will be an outcry to see lots more of her (and mermaids in general) in the future.

I've only seen "Pirates" 1 and 4 and should probably backtrack to 2 and 3, because Angelina screams at the end to Jack Sparrow: "This isn't over yet!!!" which, of course, means there will be a "Pirates" 5.

Email ThisBlogThis!Share to TwitterShare to FacebookShare to Pinterest
Labels: pirates of the caribbean 4