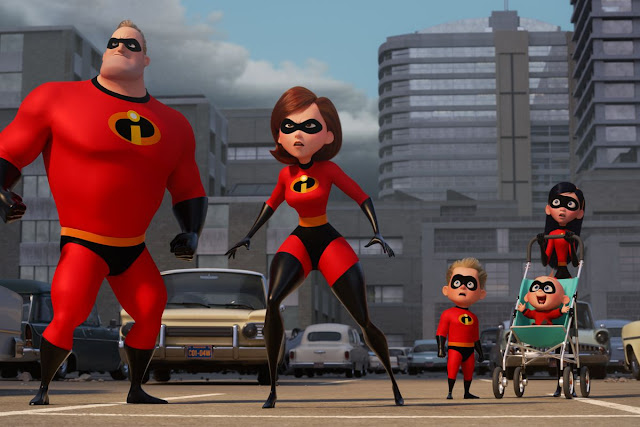 America's favorite crime-fighting family with superpowers is back in the sequel entitled simply: "Incredibles  2," and it's not bad, not bad at all.

Superheroes are outlawed in 100 countries, and it looks like our fearless defenders will have to hang up their spandex for good. But a young philanthropist and his sister, an inventor, are having none of it. They rally superheroes, including the Incredibles family, to get them reinstated through a media campaign: let the "supers" tell their own story, don't let politicians do it for them (politicians don't like the supers because "people who do good just because it's the right thing to do make them nervous").

There are two subplots featuring "strong female protagonists," namely Mom (aka Elastigirl) and the teenage daughter, Violet (with her invisible powers). The little boy, Dash, with his superspeed is almost totally overlooked in this film. Mom is torn between working outside the home (the philanthropist wants her to be the face of the superheroes comeback) and "nurturing" her kids. Dad is feeling a bit left out by not being chosen as the spokesperson. There are lots of genteel, loving and mature conversations between Mom and Dad about what to do. Eventually, Dad talks Mom into taking the job, all the while thinking staying at home with the kids will be a piece of cake and he'll have no problem--obviously setting himself up for just the opposite. (Disney just had to get in their digs at dear old Dad.)

How are men treated in "Incredibles 2"? As secondary, supporting characters, mostly. Dad's brawn is definitely needed for conquering evil, but in appearance and speech he's pretty much the slow-talking, muscle-bound, dumb jock. But, set in the cool sophistication of 1962's Camelot--pre-Women's-Lib--women couldn't be anachronistically totally running the show, however--so there's an interesting convo between Elastigirl and the philanthropist's sister about, essentially, gender roles.

The characters are well-fleshed out and there are lots of rich story details for unpacking (if you want to take kids' animated blockbusters that seriously. I certainly do.) The nemesis is the fascinating "Screenslaver" who transfixes and hypnotizes people through screens (subtext, anyone?).

Now. The baddie might be "Screenslaver" but the "Scenestealer" is indubitably the baby of the fam, Jack-Jack, who may or may not discover his superpowers. Yes, superpowers plural. It's a hoot a minute. Edna (the Edith Head character) also makes a reappearance, and she and the baby have an understanding akin to soulmates. (Fans are demanding a dedicated spinoff movie of the duo.)

"Incredibles 2" wisely knows the heart of its tale: family. Sticking together as family. At the end of the movie, as in life, it's the children who save us, often the tiniest ones. No, I don't mean the "lets-put-the-kids-in-charge-cuz-we're-just-dopey-adults" scenario. I mean that the generosity of Moms and Dads raising the next generation is its own reward: "cast your bread on the waters...and it will return to you" Ecclesiastes 11:1.

--Gotta love Mom's thunder thighs. (Hey, that would be a cool superpower.) This HAD to be a woman's idea.

--I would watch this movie again in a heartbeat (and have a discussion afterward)--and I rarely watch movies twice.

--Check out the DVD of the first Incredibles movie. On Disc 2, director Brad Bird comments on a deleted scene where Elastigirl decides to be a stay-at-home mom and how badly she's treated by other women for her choice. He says that scene was based on his own wife's experiences! Also, Disc 2 has a short of Jack-Jack and a teen babysitter (Jack-Jack's very first discovery of his superpowers). 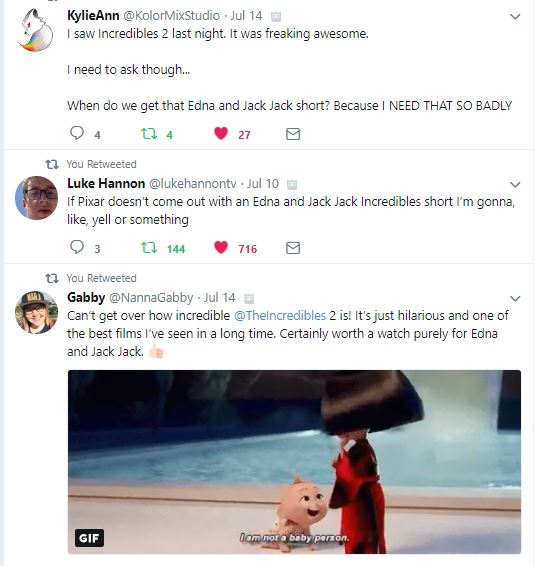