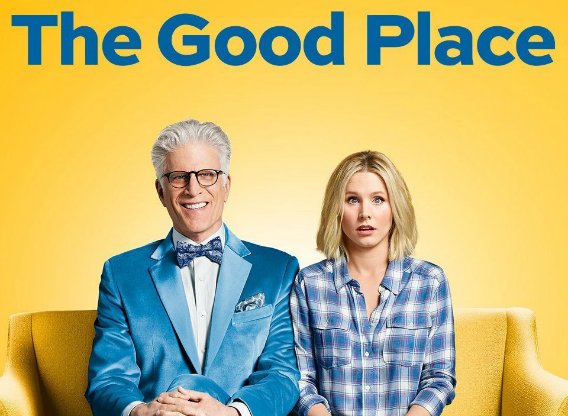 At first I avoided the NBC series, "The Good Place," which just completed its second season--because it looked like the same old/same old, "heaven and hell reimagined" cutesie tripe that feeds into the trivialization of eternity and the life to come. But, at the recommendation of a priest friend, I gave it a whirl. Not bad, and seasoned with some pretty good yuks.

Kristen Bell plays "Eleanor" who has died and just arrived in "the good place." Ted Danson plays the architect and guide of the Pleasantville-like neighborhood she's been assigned to. But all is not well in paradise. Flaws and deceptions begin to mount. The most glaring incongruity is the fact that Eleanor is, well, not really a good person. Without doing spoilers, since it's the premise of the whole show: Eleanor wound up in heaven by mistake. Yes, that's right. A glitch (there's bureaucracy even in the realms above) sent "fake Eleanor" to heaven in place of "real Eleanor" (they have the same unusual last name) who wound up in "The Bad Place." Once this fact is revealed, the fun begins.

Fake Eleanor takes philosophy lessons (smacking of moralism) from a friend in order to try to become a better person so she can stay in "The Good Place." But is it ethical that she deprive "real Eleanor" of HER well-earned eternal reward? Of course, the theology here is whack. There ARE no choices or changes in eternity.

And, unlike what Jesus told us: that there's a fixed, uncrossable chasm between heaven and hell, folks from "The Bad Place" can hop on a train to the GP to menace and threaten fake Eleanor with, basically, damnation. This crew is hilarious and they sure take an awful lot of selfies. Another thoroughly creative comedic treat is the A.I. holographic personal assistant, Janet, who even has a counterpart: "bad Janet." Similar to Alexa, you just call out her name... and she appears. But most side-splitting of all is listening to fake Eleanor try to swear. Never gets old.

Some serious writing heft is behind this show. But, in the end, there's no God--yet, anyway--and heaven is not "being with God," "God's home"...it's the banal "my happy place" and "being a good person" is pretty generic and relativistic...therefore, "The Good Place" joins the canon of ersatz celestial misfires. However, for sheer entertainment and zero actual inspiration? "The Good Place" earns its wings.

So. It's becoming clear to me that, so far, GP is about "being good without God" (see Dawkins). GP is desperately trying to find reasons to be good without God. Very Kantian. So now the motive to be good is vascillating between "you shouldn't be good in hopes of a reward" (me: why not?) to "we should be good because of what we owe to each other" (huh?) and "we should be good because of our connection with others" (more huh?). OH, AND THEY'RE PLAYING UP SEX OF ALL KINDS (OFTEN JUST MENTIONINING DIFFERENT KINDS OF SEX THAT'S BEING ENGAGED IN). AND, GET THIS. SEX IS AMORAL. IT HAS NOTHING, ABSOLUTELY NOTHING TO DO WITH BEING GOOD OR BAD! SO INDULGE!